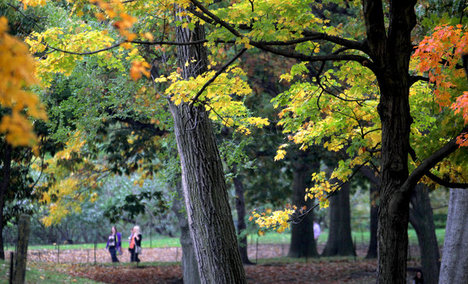 “CITY TREE, COUNTRY TREE; Scientists have been looking more closely at urban plant growth in places like Central Park.” Source of caption and photo: online version of the NYT article quoted and cited below.

(p. D3) . . . , some . . . scientists have moved beyond political questions to explore how rising levels of heat and emissions might provide at least some benefits for the planet.
. . .
Lewis H. Ziska, a plant physiologist for the Department of Agriculture, . . . [said] . . . , “we need to think about the tools we have at hand, and how we can use them to make climate change work for us.”
Among the tools are cities, which have conditions that can mimic what life may be like in the temperate zone of a heated planet.
“The city is our baseline for what might happen in future decades, and with all the negative effects global warming may have, there may be a bit of a silver lining,” said Stephanie Searle, a plant physiologist who led a Columbia University research project on tree growth, and now works as a biofuels researcher at the nonprofit International Council on Clean Transportation. “Higher nighttime temperatures, at least, may boost plant growth.” Robust growth takes more carbon dioxide out of the atmosphere.
. . .
The effects of higher, mostly urban emissions are what prompted Dr. Ziska to reappraise global warming as a potential benefit to humanity. In an essay last summer in the journal Proceedings of the Royal Society B, Dr. Ziska and a group of colleagues from across the world argued that an expected increase in world population to 9 billion people from 7 billion by 2050 necessitated a “green revolution” to enhance yields of basic grains. Carbon dioxide, the group suggested, could be the answer.
Since 1960, world atmospheric carbon dioxide concentrations have risen by 24 percent to 392 parts per million and could reach 1,000 parts per million by the end of this century.
. . .
In New York, the Columbia researchers studied for eight years the growth of red oak seedlings at four locations, including an “urban” site near the northeastern edge of Central Park at 105th Street and a “remote” site in the Catskills 100 miles north of Manhattan near the Ashokan Reservoir.
. . .
The Columbia team’s first red oak experiments ended in 2006, and average minimum temperatures in August were 71.6 degrees at the city site, but 63.5 degrees in the Catskills. Researchers also noticed that the city oaks had elevated levels of leaf nitrogen, a plant nutrient.
The team did two more rounds of experiments, then in 2008 made a final outdoor test using fertilized rural soil everywhere so all the seedlings got plenty of nitrogen. The urban oaks, harvested in August 2008, weighed eight times as much as their rural cousins, mostly because of increased foliage.
“On warm nights, the tree respires more,” Dr. Griffin said. “It invests its carbon sugars to build tissue.” By morning, the tree’s sugars are depleted, and it has to photosynthesize more during the day, he continued. The tree grows more leaves and gets bigger.