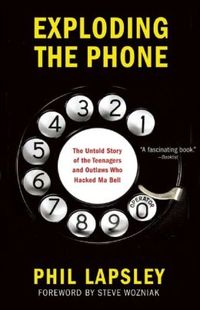 (p. C6) Mr. Lapsley also describes John Draper, aka Captain Crunch, who was probably the most celebrated of the phreakers; his nickname derived from the fact that whistles that used to come in Cap’n Crunch cereal boxes happened to generate the key 2600-Hz tone used in long-distance switching. . . .

The phone-phreak netherworld was introduced to a mass audience by the October 1971 issue of Esquire magazine, which included what has to be (at least indirectly) one of the most influential articles ever written: Ron Rosenbaum’s “Secrets of the Little Blue Box.” Not only did it turn phreakers into folk heroes, but it inspired two young men, Steve Wozniak (who provided the foreword for this book) and Steve Jobs, to construct and sell blue boxes. Going door to door in Berkeley dorms, they managed to sell several dozen at $170 each. The “two Steves” savored this mix of clever engineering and entrepreneurial hustle: As Mr. Lapsley quotes Jobs saying: “If we hadn’t made blue boxes, there would have been no Apple.” (Mr. Rosenbaum’s article also put the “phreak” into “phone phreak.”)
. . .: By the 1980s, computerized phone systems and fiber-optic cables rendered many of the old phreaking modes obsolete. In addition, I can’t help suspecting that the breakup of AT&T in 1984–the result of an antitrust lawsuit filed by the federal government–deeply discouraged the hard-core phreaks. Surreptitiously penetrating one of the shriveled new regional phone companies must have seemed a paltry caper compared with taking on mighty, majestic AT&T.
. . .
I must, however, take issue with one of Mr. Lapsley’s conclusions. In reflecting on the phreaks’ legacy, he writes: “The phone phreaks taught us that there is a societal benefit to tolerating, perhaps even nurturing (in the words of Apple) the crazy ones–the misfits, the rebels, the troublemakers.” Is that truly what they taught us? . . .
Wilt Chamberlain supposedly once said that “nobody roots for Goliath.” Perhaps. But the lesson to be learned from those waging guerrilla war against giants like the phone company and the Internet is that sophomoric savants who tamper with society’s indispensable systems ultimately harm all too many innocent people.

The book under review, is:
Lapsley, Phil. Exploding the Phone: The Untold Story of the Teenagers and Outlaws Who Hacked Ma Bell. New York: Grove Press, 2013.