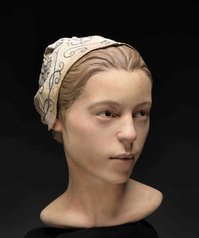 “A facial reconstruction of a 14-year-old girl whose skull shows signs that her remains were used for food after her death and burial.” Source of caption and image: online version of the NYT article quoted and cited below.

Acemoglu and Robinson in the long, but thought-provoking, opening chapter of their Why Nations Fail book, discuss starvation at the Jamestown colony. Only they don’t mainly attribute it to a harsh winter or a slow rescue from England, as does the article quoted below (it is from the New York Times, after all).
Economists Acemoglu and Robinson (p. 23) instead criticize the colony’s initial plan to thrive by enslaving natives to bring them gold and food. Eventually John Smith made the bold suggestion that the colonists should try to work to produce something to eat or to trade. The rulers of the colony ignored Smith, resulting in starvation and cannibalism.

(p. A11) Archaeologists excavating a trash pit at the Jamestown colony site in Virginia have found the first physical evidence of cannibalism among the desperate population, corroborating written accounts left behind by witnesses. Cut marks on the skull and skeleton of a 14-year-old girl show that her flesh and brain were removed, presumably to be eaten by the starving colonists during the harsh winter of 1609.

The remains were excavated by archaeologists led by William Kelso of Preservation Virginia, a private nonprofit group, and analyzed by Douglas Owsley, a physical anthropologist at the National Museum of Natural History in Washington. The skull bears tentative cuts to the forehead, followed by four strikes to the back of the head, one of which split the skull open, according to an article in Smithsonian magazine, where the find was reported Wednesday.
It is unclear how the girl died, but she was almost certainly dead and buried before her remains were butchered. According to a letter written in 1625 by George Percy, president of Jamestown during the starvation period, the famine was so intense “thatt notheinge was Spared to mainteyne Lyfe and to doe those things which seame incredible, as to digge upp deade corpes outt of graves and to eate them.”

The Acemoglu book mentioned above is:
Acemoglu, Daron, and James Robinson. Why Nations Fail: The Origins of Power, Prosperity, and Poverty. New York: Crown Business, 2012.

“Human remains from the Jamestown colony site in Virginia bearing evidence of cannibalism.” Source of caption and photo: online version of the NYT article quoted and cited above.