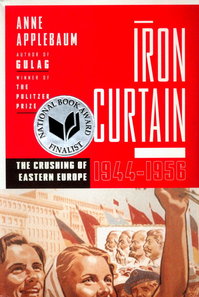 (p. 16) That Soviet tanks carried Moscow-trained agents into Poland, Hungary, Romania, Bulgaria, Czechoslovakia and East Germany was known in the West at the time and has been well documented since. When those agents set out to produce not only a friendly sphere of Soviet influence but also a cordon of dictatorships reliably responsive to Russian orders, Winston Churchill was moved to warn, just days after the Nazis’ surrender in 1945, that an Iron Curtain was being drawn through the heart of Europe. (He coined the metaphor in a message to President Truman a full year before he used it in public in Fulton, Mo.) And Matyas Rakosi, the “little Stalin” of Hungary, was well known for another apt metaphor, describing how the region’s political, economic, cultural and social oppositions were to be destroyed by “cutting them off like slices of salami.”

Applebaum tracks the salami slicing as typically practiced in Poland, Hungary and Germany, and serves up not only the beef but also the fat, vinegar and garlic in exhausting detail. She shows how the knives were sharpened before the war’s end in Soviet training camps for East European Communists, so that trusted agents could create and control secret police forces in each of the “liberated” nations. She shows how reliable operatives then took charge of all radio broadcasting, the era’s most powerful mass medium. And she demonstrates how the Soviet stooges could then, with surprising speed, harass, persecute and finally ban all independent institutions, from youth groups and welfare agencies to schools, churches and rival political parties.
Along the way, millions of Germans, Poles, Ukrainians and Hungarians were ruthlessly driven from their historic homes to satisfy Soviet territorial ambitions. Millions more were deemed opponents and beaten, imprisoned or hauled off to hard labor in Siberia. In Stalin’s paranoid sphere, not even total control of economic and cultural life was sufficient. To complete the terror, he purged even the Communist leaders of each satellite regime, accusing them of treason and parading them as they made humiliating confessions.
It is good to be reminded of these sordid events, now that more archives are accessible and some witnesses remain alive to recall the horror.