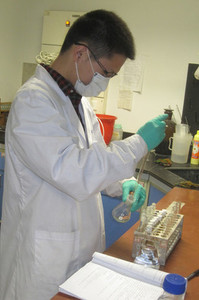 “Engineering student Xie Chaobo has yet to land a job.” Source of caption and photo: online version of the WSJ article quoted and cited below.

(p. A1) BEIJING–Xie Chaobo figures he has the credentials to land a job at one of China’s big state-owned firms. He is a graduate student at Tsinghua University, one of China’s best. His field of study is environmental engineering, one of China’s priorities. And he is experimenting with new techniques for identifying water pollutants, which should make him a valuable catch.
But he has applied to 30 companies so far and scored just four interviews, none of which has led to a job.
Although Mr. Xie’s parents are entrepreneurs who have built companies that make glasses, shoes and now water pumps, he has no interest in working at a private startup. Chinese students “have been told since we were children to focus on stability instead of risk,” the 24-year-old engineering student says.
Over the past decade, the number of new graduates from Chinese universities has increased sixfold to more than six million a year, creating an epic glut that is depressing wages, (p. A10) leaving many recent college graduates without jobs and making students fearful about their future. Two-thirds of Chinese graduates say they want to work either in the government or big state-owned firms, which are seen as recession-proof, rather than at the private companies that have powered China’s remarkable economic climb, surveys indicate. Few college students today, according to the surveys, are ready to leave the safe shores of government work and “jump into the sea,” as the Chinese expression goes, to join startups or go into business for themselves, although many of their parents did just that in the 1990s. 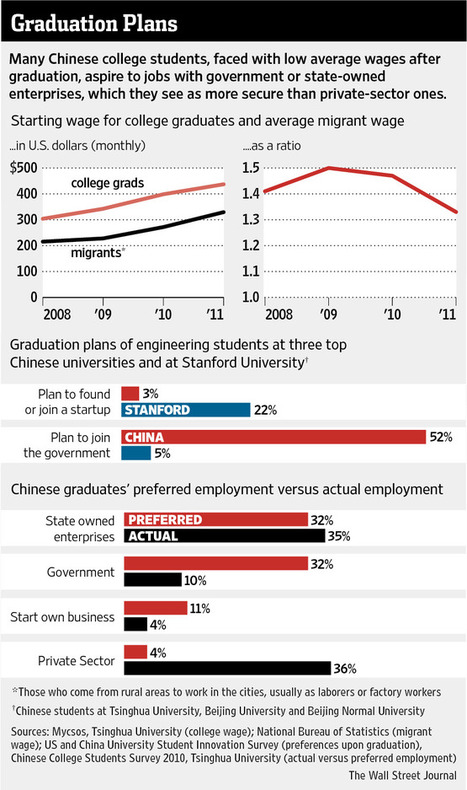 Source of table: online version of the WSJ article quoted and cited above.