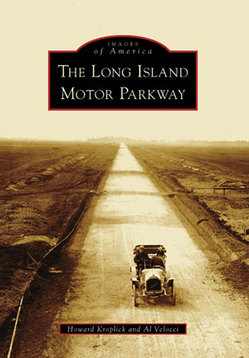 (p. 13) It survives only as segments of other highways, as a right of way for power lines and as a bike trail, but the Long Island Motor Parkway still holds a sense of magic as what some historians say is the country’s first road built specifically for the automobile. It opened 100 years ago last Friday as a rich man’s dream.

As detailed in a new book, “The Long Island Motor Parkway” by Howard Kroplick and Al Velocci (Arcadia Publishing), the parkway ran about 45 miles across Long Island, from Queens to Ronkonkoma, and was created by William Kissam Vanderbilt II, the great-grandson of Cornelius Vanderbilt.

The younger Vanderbilt was a car enthusiast who loved to race. He had set a speed record of 92 miles an hour in 1904, the same year he created his own race, the Vanderbilt Cup.
But his race came under fire after a spectator was killed in 1906, and Vanderbilt wanted a safe road on which to hold the race and on which other car lovers could hurl their new machines free of the dust common on roads made for horses. The parkway would also be free of “interference from the authorities,” he said in a speech.
So he created a toll road for high-speed automobile travel. It was built of reinforced concrete, had banked turns, guard rails and, by building bridges, he eliminated intersections that would slow a driver down. The Long Island Motor Parkway officially opened on Oct. 10, 1908, and closed in 1938.
. . .
But by the end of Vanderbilt’s life (he died in 1944), the public had come to feel entitled to car ownership. And there was growing pressure for public highways, like the parkways that the urban planner Robert Moses was building.

In 1938, Moses refused Vanderbilt’s appeal to incorporate the motor parkway into his new parkway system. The motor parkway just could not compete with the public roads, even after the toll was reduced to 40 cents, and Moses eventually gained control of Vanderbilt’s pioneering road for back taxes of about $80,000. The day of public roads had come, supplanting private highways.
. . .
The parkway marked the beginning of a process: the road was designed for the car. But in offering higher speeds, the parkway and other modern roads would push cars to their technical limits and beyond, inspiring innovation. In that sense, the first modern automobile highway helped to create the modern automobile.

“Approximate Route of Long Island Motor Parkway.” Source of caption and map: online version of the NYT article quoted and cited above.