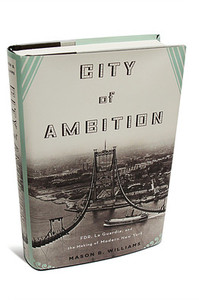 But, as Mason B. Williams’s fascinating new book “City of Ambition: FDR, La Guardia, and the Making of Modern New York” reminds us, La Guardia’s success rested to a large degree on Franklin Roose­velt’s decision to “channel the resources of the federal government through the agencies of America’s cities and counties.”
The questions raised by the New Deal’s role in the development of New York remain relevant. President Obama champions infrastructure spending, but does that spending create local value? Should Washington support cities, like Detroit, that cannot support themselves? Does the power created by an expansive public sector lead to unacceptable abuse?
. . .
Williams tells the story of La Guardia and Roosevelt with insight and elegance, but his book doesn’t address the deeper controversies around that partnership. Did La Guardia’s New Deal spending saddle New York with obligations too expensive to maintain in the long run? Did a car-heavy construction strategy eventually enable an exodus from the city? La Guardia built much that still has value, but did the precedent of federal funding make foolish projects more likely?
Still, Williams’s aim is to write history, not policy analysis, and he succeeds impressively at that. America’s cities are the country’s true economic heartland, and much of our most important past is urban. “City of Ambition” helps us to understand that past.

For the full review, see:
EDWARD L. GLAESER. “Fiorello!; LaGuardia’s Outsize Personality Contributed to His Success, But So Did His Partnership with Franklin D. Roosevelt.” The New York Times Book Review (Sun., July 18, 2013): 16.
(Note: ellipsis added.)
(Note: the online version of the review has the date July 18, 2013, and the title “Fiorello!; ‘City of Ambition,’ by Mason B. Williams.”)