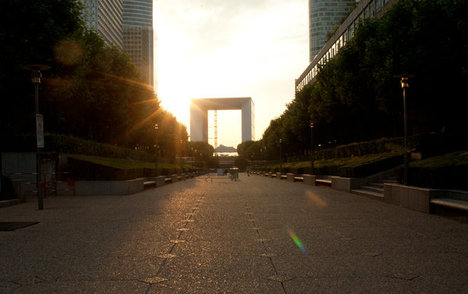 “La Défense can feel like a ghost town after 5 p.m. and on weekends, once the district’s office workers have left.” Source of caption and photo: online version of the NYT article quoted and cited below.

(p. B1) . . . La Défense, begun during the presidency of Charles de Gaulle in the late 1950s and built just west of Paris by bulldozing slums and paving over farmland, has always worked better in architectural theory than in anthropological practice.

Rather than the Parisian business hub its founders described, it often seems more like the isolated end of a spoke that has highlighted a crucial flaw in urban planning — a concern with making architectural statements — rather than an affinity for the people in and around the buildings.
When non-French planning experts assess La Défense, they say it shares the same problems as the Canary Wharf complex in London, where developers have tried to supplant the City with Big Architecture and whose artificial origins may be hard to overcome. The experts look more favorably on the somewhat organic mix of (p. B6) business and residential of Lower Manhattan, which has evolved over the last century.
“La Défense has always suffered from a creative hypothermia,” said Wojciech Czaja, an Austrian architecture critic. “It is a sad area because it is atmospherically and emotionally perceived as a business district only.”
The public agency that manages the complex has hired an architectural firm to draft a new master plan in hopes of making the grandiose vision for La Défense a livable reality.
. . .
“There is nothing good about living here,” said Carlin Pierre, 54, who works at a waste disposal center in the district and resides in one of the Brutalist communal, rent-subsidized housing blocks tucked amid the high-rise office buildings. “Sure, it’s a nice area to come as a tourist, or even to work,” Mr. Pierre said, “but it’s terrible to live in La Défense.”