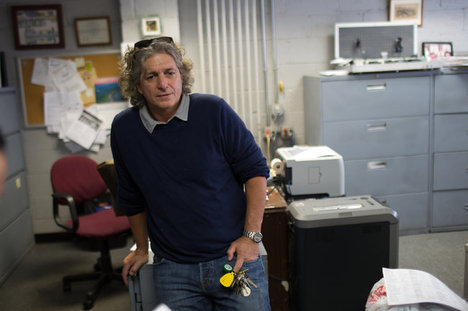 “”They’re picking on my employees,” Edward Taylor, the president of Down East Seafood, said, referring to the commission.” Source of caption and photo: online version of the NYT article quoted and cited below.

(p. A16) The day after Jonathan Sanchez was released from prison in 2010 after serving three years for a burglary, he walked into Down East Seafood in Hunts Point in the South Bronx and asked for a job, and a second chance. He got both.

But now Mr. Sanchez must document the past he has tried to leave behind, in an 11-page application for a photo identification card issued by a city agency that is responsible for ferreting out organized crime. He is one of hundreds of food workers who have come under scrutiny in recent years by the agency, the New York City Business Integrity Commission, not because of any known ties to mob bosses but simply because they work for a company in Hunts Point.
. . .
“This was my brand new start,” said Mr. Sanchez, 26, who makes $40,000 a year packing lobster orders.
Mr. Sanchez said he worried that his past crime will follow him from job to job and brand him as an ex-con. “I feel violated because I don’t think those things have to be asked,” he said. “I feel that it could stigmatize me.”
. . .
Edward Taylor, the president of Down East Seafood, said more than half of his 60 employees had told him they did not want to complete the application. A couple of them have even said they would instead quit.
Mr. Taylor, who had to answer similar questions himself to register the company, said he would not have moved to Hunts Point from Manhattan in 2005 if he had known about the commission. The company, which he started in 1990 with $500 borrowed from a friend, supplies more than 700 establishments, including Dean & DeLuca, the Harvard and Yale Clubs and the dining rooms at the United Nations.
“They’re picking on my employees,” he said. “I didn’t open my own company to have someone else tell me how to run it.”