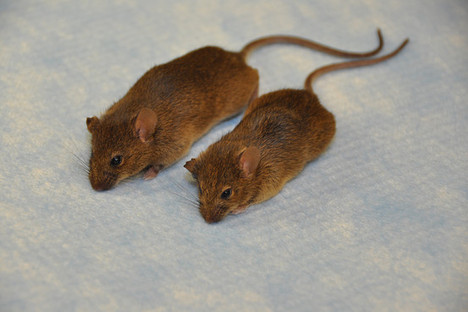 “NIH researchers found that lowering the expression of a single gene helped extend the life of mice by about 20%. A mouse with a manipulated gene on the right and an unchanged mouse on the left.” Source of caption and photo: online version of the WSJ article quoted and cited below.

(p. A3) By reducing the activity of one type of gene, scientists said they increased the average life span of mice by about 20%, a feat that in human terms is akin to extending life by about 15 years.

Moreover, the researchers at the National Institutes of Health found that memory, cognition and some other important traits were better preserved in the mice as they aged, compared with a control group of mice that had normal levels of a protein put out by the gene.
The findings, published Thursday [August 29, 2013] in the journal Cell Reports, strengthen the case that the gene, called mTOR, is a major regulator of the aging process.
. . .
The results . . . build on a growing body of research challenging the belief that aging is an intractable biological process, prompting scientists to think of slowing aging as a possible way to prevent disease.
“What we need right now is for scientists and the public to wake up to the concept that you can slow aging,” said Brian Kennedy, president of the Buck Institute for Aging Research in Novato, Calif., who wasn’t involved in the new study. “If you do, you prevent many of the diseases that we’re so scared of and that are associated with aging.” They include cardiovascular disease, cancer and Alzheimer’s disease.

For the full story, see:
RON WINSLOW. “Altered Gene Points Toward Longer Life Spans; Successful Experiment With Mice May One Day Play Role in Slowing Human Aging; Side Effects Could Be Problematic.” The Wall Street Journal (Fri, August 30, 2013): A3.
(Note: ellipsis, and bracketed date, added.)
(Note: the online version of the story has the date August 29, 2013, and has the title “Genetic Manipulation Extends Life of Mice 20%; But Translating Findings to Humans Faces Many Hurdles.”)