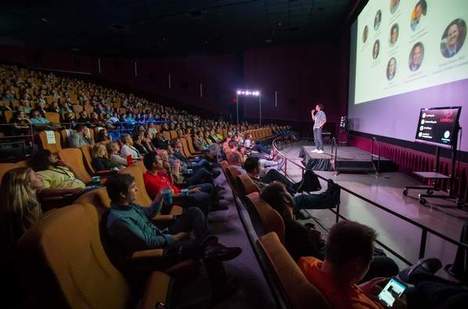 “Luis López pitches his startup, CardioSys, to investors during Demo Day at Aksarben Cinema this week. The event was the culmination of a 90-day Straight Shot startup accelerator program that offered new companies networking opportunities, advisers and investment dollars. Seven startups were in the inaugural accelerator class.” Source of caption and photo: online version of the Omaha World-Herald article quoted and cited below.

Luis López, the entrepreneur who is featured in the article quoted below, was a student of mine in both my Economics of Entrepreneurship and my Economics of Technology seminars (and before that, in micro principles). I cannot say that I taught him everything he knows, but it appears that I did not do him much harm.

The 25-year-old Central High grad had received a job offer from Gallup. But he turned it down, choosing to take an entrepreneurial risk over a predictable salary and benefits.
“I can always apply for a job in the corporate world,” he said, but it’s not every day that one’s company is accepted into an accelerator program that offers $20,000 in investment, more than 300 mentors and more than $75,000 in in-kind services.
The risk paid off, López said last week as the 90-day program wrapped up. The López brothers’ startup, CardioSys — which uses predictive analytics to calculate a person’s risk of developing conditions like heart disease and diabetes based on factors such as age, blood pressure and lipid profiles — came out of the program with a group of nine advisers.
. . .
(p. 2D) Luis López said CardioSys is hoping to land some investment in the next month or two, and is now looking at applying for a short-term health industry-focused incubator program in California, which the founders were connected with via Straight Shot.
In the long term, however, López said that with its strong community of medical and insurance providers, Omaha is CardioSys’ home. At Demo Day, the startup was voted crowd favorite. “I was surprised. It’s an honor to have people excited about what we’re doing,” he said. 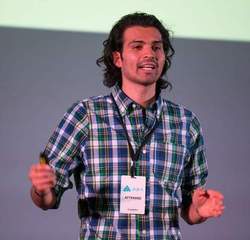 “Luis Lopez, who with his brother Danny Lopez, created CardioSys, gives his pitch at Demo Day.” Source of caption and photo: online version of the Omaha World-Herald article quoted and cited above.