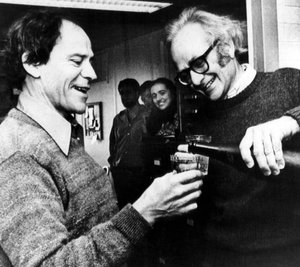 “Dr. David Hubel, right, celebrating with his longtime collaborator, Dr. Torsten Wiesel, after they won the Nobel Prize in 1981.” Source of caption and photo: online version of the NYT obituary quoted and cited below.

(p. A25) Dr. Hubel and Dr. Wiesel liked to recall that their initial discovery about how vision works resulted from luck. Working in a tiny basement laboratory at Johns Hopkins, the pair struggled for days to coax brain cells in cats to respond to images of dark and light spots. Becoming increasingly frustrated, they waved their arms, jumped around, and, in a moment of levity, displayed images of glamorous women from magazines.

Then, as they shifted a slide in the opthalmoscope, a cell in the cat’s visual cortex suddenly started to fire. The edge of the slide had cast a straight, dark line on the animal’s retina. “It was what the cell wanted, and it wanted it, moreover, in just one narrow range of orientations,” Dr. Hubel said in his Nobel lecture.
They studied the cell for nine hours, and then, Dr. Wiesel recalled, ran down the hall screaming with joy.