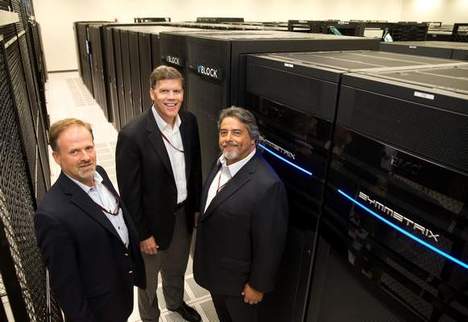 “Cosentry, an Omaha-based provider of data center storage and managed technology services, has a new CEO, Brad Hokamp, center. With him at the Cosentry data center in Papillion are company founders Kevin Dohrmann, left, and Manny Quevedo.” Source of caption and photo: online version of the Omaha World-Herald article quoted and cited below.

Innovation through creative destruction brings us the new products and processes that make our lives longer, richer and more satisfying. The major downside of creative destruction is the job loss of those working for firms that are creatively destroyed. Sometimes, in class, I use Omaha’s Inacom as a concrete example. Inacom was a value-added retailer of computer equipment. They would buy PCs from IBM, Compaq and the like, then add software and hardware, and re-sell and install for firms, at a mark-up. They were creatively destroyed by Dell’s process innovation of customizing and selling direct, at much lower prices than Inacom charged. When I arrived in Omaha, Inacom was one of a handful of Fortune 500 firms. Now Inacom is gone. But just because a firm is creatively destroyed does not imply that all those who worked for the firm are creatively destroyed. Dohrmann and Quevedo were executives at Inacom. They had the skills, knowledge, resilience and work ethic to create their own entrepreneurial startup that has thrived. Not everyone can do what Dohrmann and Quevedo did. But everyone should be able to improve their skills, knowledge, resilience, and work ethic, so that if creative destruction destroys the firm that employs them, they will still survive and possibly thrive.

“Everyone saw it as a mall that was in deterioration, and I walked in and saw the most beautiful building in Omaha,” co-founder Manny Quevedo said, (p. 3D) remembering solid walls and below-grade space for computer systems.
Investments from Omaha firms Waitt Co. and McCarthy Capital along the way helped the firm grow; it was sold in 2011 to Boston private equity firm TA Associates but still has its headquarters at 127th Street and West Dodge Road.
. . .
The company’s workforce has approximately doubled in the last five years to nearly 200, more than half of them in Nebraska, and will continue to grow gradually with the expansion as Cosentry hires more engineers and technicians, Quevedo said.
Today the company has six data centers, including two each in the Kansas City and Sioux Falls, S.D., metropolitan areas. If you use utilities or health care services or do any shopping or banking in the region, there’s a chance some of your information has been stored or processed through Cosentry’s servers.
Cosentry started with what Quevedo said was a handful of clients and grew to hundreds within its first five years.
. . .
(p. 3D) Cosentry Timeline
2001: With investment from Waitt Co., Cosentry is started by Manny Quevedo and Kevin Dohrmann, former employees of InaCom, the former Omaha Fortune 500 computer dealer that began as a division of Valmont Industries but merged with VanStar of Atlanta in 2000 and later declared bankruptcy. Cosentry creates a data center in Bellevue.
2005: Cosentry, also called IPR Inc., sold its IP Revolution division to a Kansas firm, Choice Solutions. IP Revolution sold voice and data communications services and systems. Cosentry doubles the size of its Bellevue data center and expands to the Kansas City and Sioux Falls, S.D., markets.
2008: Omaha investment firm McCarthy Capital invests in the firm. At the time, Cosentry had 95 employees.
2010: Cosentry cuts the ribbon on the $26 million Midlands Data Center in Papillion, a joint project with Alegent Health, which uses the center to store electronic medical records.
2011: Boston investment firm TA Associates buys Cosentry for an undisclosed amount from McCarthy and Waitt. The local management team continues to operate and have an ownership stake in Cosentry. The firm expands with second data centers in both the Sioux Falls and Kansas City markets.
2013: Cosentry refinances its credit facilities to provide up to $100 million to enable expansion, including the expansion of the Midlands Data Center. Today, Cosentry has nearly 200 employees and six data centers in three metropolitan areas. 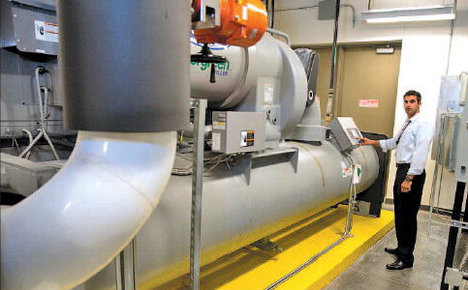 “Scott Capps of Cosentry’s Papillion data center with the cooling system that helped Cosentry earn an Energy Star certification, which is given by the Environmental Protection Agency based on energy efficiency and lower emissions. It’s the only data center in Nebraska with the certification.” Source of caption and photo: the archive online version of the Omaha World-Herald article quoted and cited above.