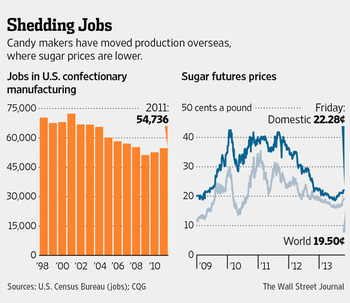 U.S. prices can’t fall much lower because of a federal government program that guarantees sugar processors a minimum price. The rest of the world also has a surfeit of sugar, but fewer price restrictions, and big growers like Brazil are expecting a record crop for the current season.
The squeeze explains why Atkinson Candy Co. has moved 80% of its peppermint-candy production to a factory in Guatemala that opened in 2010. That means it can sell bite-size Mint Twists to retailers for 10% to 20% less.
“It wasn’t like we did it for (p. A14) profit reasons. We did it for survival reasons,” said Eric Atkinson, president of the family-owned candy maker, based in Lufkin, Texas. “These are 60 jobs down there…that could be in the U.S.,” he added. “It’s a damn shame.”
Jelly Belly Candy Co. is finishing its second expansion of a factory in Thailand that was opened by the Fairfield, Calif., company in 2007. The sixth-generation family-owned firm sells about 20% of its jelly beans, made in flavors from buttered popcorn to very cherry, outside the U.S.
Sugar makes up about half of the ingredients and cost of a typical jelly bean, said Bob Simpson, Jelly Belly’s president and chief operating officer. Thailand is the world’s fourth-largest sugar producer and gives Jelly Belly access to cheaper sugar, labor and other raw materials than the candy maker has in the U.S.
“You can’t compete shipping finished U.S. goods” anymore, Mr. Simpson said. In the U.S., Jelly Belly has had to raise prices “several times” in the past 10 years due to high sugar prices.
. . .
Three candy-making jobs are lost for each sugar-growing and processing job saved by higher sugar prices, according to a Commerce Department report in 2006.
In a sign that candy makers are taking advantage of lower sugar prices elsewhere, the amount of sugar contained in imported products surged 33% from 2002 to 2012, according to the Agriculture Department. 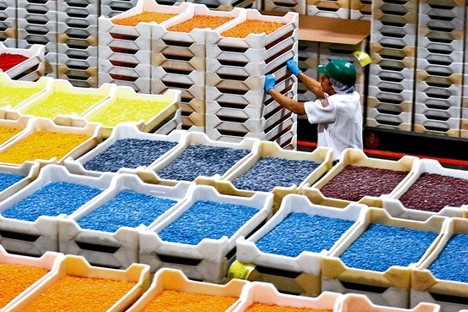 “Jelly Belly, whose facility in Fairfield, Calif., is shown above, is expanding its factory in Thailand.” Source of caption and photo: online version of the WSJ article quoted and cited above.