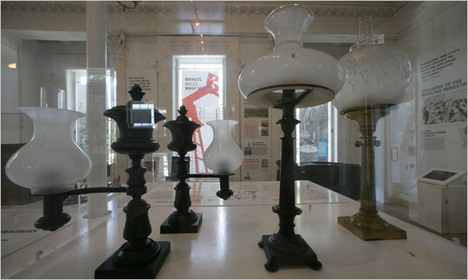 “The whale-oil lamps at the Sag Harbor Whaling and Historical Museum are obsolete, though at one time, whale oil lighted much of the Western world.” Source of caption and photo: online version of the NYT article quoted and cited below.

(p. 20) Like oil, particularly in its early days, whaling spawned dazzling fortunes, depending on the brute labor of tens of thousands of men doing dirty, sweaty, dangerous work. Like oil, it began with the prizes closest to home and then found itself exploring every corner of the globe. And like oil, whaling at its peak seemed impregnable, its product so far superior to its trifling rivals, like smelly lard oil or volatile camphene, that whaling interests mocked their competitors.

“Great noise is made by many of the newspapers and thousands of the traders in the country about lard oil, chemical oil, camphene oil, and a half-dozen other luminous humbugs,” The Nantucket Inquirer snorted derisively in 1843. It went on: “But let not our envious and — in view of the lard oil mania — we had well nigh said, hog-gish opponents, indulge themselves in any such dreams.”
But, in fact, whaling was already just about done, said Eric Jay Dolin, who . . . is the author of “Leviathan: The History of Whaling in America.” Whales near North America were becoming scarce, and the birth of the American petroleum industry in 1859 in Titusville, Pa., allowed kerosene to supplant whale oil before the electric light replaced both of them and oil found other uses.
. . .
Mr. Dolin said the message for today was that one era’s irreplaceable energy source could be the next one’s relic. Like whaling, he said, big oil is ripe to be replaced by something newer, cleaner, more appropriate for its moment.