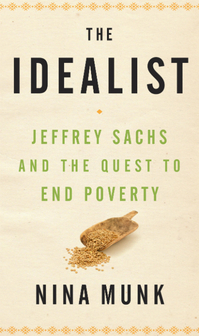 (p. A19) Nina Munk’s new book, “The Idealist,” is about the well-known economist Jeffrey Sachs and his “quest to end poverty,” as the subtitle puts it.
. . .
The quest began in 2005, when Sachs, who directs the Earth Institute at Columbia University, started an ambitious program called the Millennium Villages Project. He and his team chose a handful of sub-Saharan African villages, where they imposed a series of “interventions” in such areas as agriculture, health and education.
. . .
With almost every intervention, she documents the chasm that exists between the villagers and those running the project. At one point, the Millennium Villages Project persuades the farmers in Ruhiira to grow maize instead of their traditional crop, called matoke. “The results were fantastic,” she reports, a bumper crop. Except there were no buyers for the maize, so some of it wound up being eaten by rats. In Dertu, Sachs’s staff decided it should set up a livestock market. It flopped. Efforts to convince villagers to start small businesses largely failed. The critical problem of getting clean water to the villages was enormously expensive.
Ultimately, reports Munk, Dertu was scaled back by the Millennium Villages Project while Ruhiira is today lauded as one of the project’s most successful villages. “There is no question the lives of people in Ruhiira have been improved,” Munk told me. “I’ve seen it.” But she is dubious about what that means — other than the fact that if you pump millions of dollars into an isolated African village, the villagers’ lives will be better.
. . .
That things in Africa are getting better is undeniable. Child mortality is down, as is the number of people living in extreme poverty. In his book, “Emerging Africa,” Steve Radelet, the former chief economist for the United States Agency for International Development, gives credit to such factors as more democratic governments, a new class of civil servants and businesspeople, and sounder economic policies. Sachs wants us to believe that the Millennium Villages Project has also helped show the way.
“The Idealist” makes it tough to believe it’s the latter.

The book under review is:
Munk, Nina. The Idealist: Jeffrey Sachs and the Quest to End Poverty. New York: Doubleday, 2013.