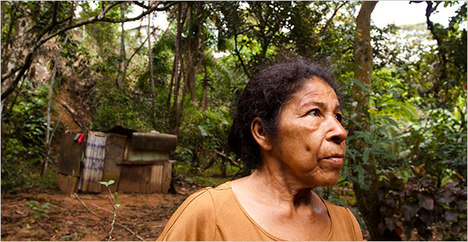 “NEW GROWTH; Marta Ortega de Wing once raised pigs in Chilibre, Panama, on land now reverting to nature, a trend dimming the view of primeval forests as sacred.” Source of caption and photo: online version of the NYT article quoted and cited below.

(p. A1) CHILIBRE, Panama — The land where Marta Ortega de Wing raised hundreds of pigs until 10 years ago is being overtaken by galloping jungle — palms, lizards and ants.

Instead of farming, she now shops at the supermarket and her grown children and grandchildren live in places like Panama City and New York.
Here, and in other tropical countries around the world, small holdings like Ms. Ortega de Wing’s — and much larger swaths of farmland — are reverting to nature, as people abandon their land and move to the cities in search of better livings.
These new “secondary” forests are emerging in Latin America, Asia and other tropical regions at such a fast pace that the trend has set off a serious debate about whether saving primeval rain forest — an iconic environmental cause — may be less urgent than once thought. By one estimate, for every acre of rain forest cut down each year, more than 50 acres of new forest are growing in the tropics on land that was once farmed, logged or ravaged by natural disaster.
“There is far more forest here than there was 30 years ago,” said Ms. Ortega de Wing, 64, who remembers fields of mango trees and banana plants.
The new forests, the scientists argue, could blunt the effects of rain forest destruction by absorbing carbon dioxide, the leading heat-trapping gas linked to global warming, one crucial role that rain forests play. They could also, to a lesser extent, provide habitat for endangered species.