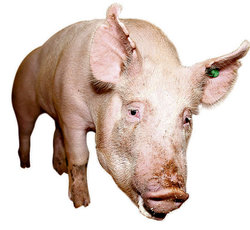 “The Enviropig Scientists at the University of Guelph, in Canada, developed these pigs to produce more environmentally friendly waste than conventional pigs. But the pigs were killed because the scientists could not get approval to sell them as food.” Source of caption and photo: online version of the NYT article quoted and cited below.

(p. 4) If patience is a virtue, then AquaBounty, a Massachusetts biotech company, might be the most virtuous entity on the planet.

In 1993, the company approached the Food and Drug Administration about selling a genetically modified salmon that grew faster than normal fish. In 1995, AquaBounty formally applied for approval. Last month, more than 17 years later, the public comment period, one of the last steps in the approval process, was finally supposed to conclude. But the F.D.A. has extended the deadline — members of the public now have until late April to submit their thoughts on the AquAdvantage salmon. It’s just one more delay in a process that’s dragged on far too long.
The AquAdvantage fish is an Atlantic salmon that carries two foreign bits of DNA: a growth hormone gene from the Chinook salmon that is under the control of a genetic “switch” from the ocean pout, an eel-like fish that lives in the chilly deep. Normally, Atlantic salmon produce growth hormone only in the warm summer months, but these genetic adjustments let the fish churn it out year round. As a result, the AquAdvantage salmon typically reach their adult size in a year and a half, rather than three years.
. . .
We should all be rooting for the agency to do the right thing and approve the AquAdvantage salmon. It’s a healthy and relatively cheap food source that, as global demand for fish increases, can take some pressure off our wild fish stocks. But most important, a rejection will have a chilling effect on biotechnological innovation in this country.
. . .
Then there’s the Enviropig, a swine that has been genetically modified to excrete less phosphorus. Phosphorus in animal waste is a major cause of water pollution, and as the world’s appetite for meat increases, it’s becoming a more urgent problem. The first Enviropig, created by scientists at the University of Guelph, in Canada, was born in 1999, and researchers applied to both the F.D.A. and Health Canada for permission to sell the pigs as food.
But last spring, while the applications were still pending, the scientists lost their funding from Ontario Pork, an association of Canadian hog farmers, and couldn’t find another industry partner. (It’s hard to blame investors for their reluctance, given the public sentiment in Canada and the United States, as well as the uncertain regulatory landscape.) The pigs were euthanized in May.
The F.D.A. must make sure that other promising genetically modified animals don’t come to the same end. Of course every application needs to be painstakingly evaluated, and not every modified animal should be approved. But in cases like AquaBounty’s, where all the available evidence indicates that the animals are safe, we shouldn’t let political calculations or unfounded fears keep these products off the market. If we do that, we’ll be closing the door on innovations that could help us face the public health and environmental threats of the future, saving countless animals — and perhaps ourselves.