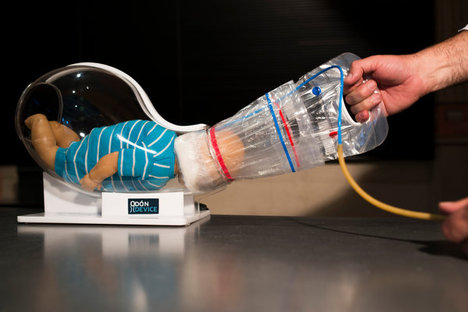 “With Jorge Odón’s device, a plastic bag inflated around a baby’s head is used to pull it out of the birth canal.” Source of caption and photo: online version of the NYT article quoted and cited below.

(p. A1) The idea came to Jorge Odón as he slept. Somehow, he said, his unconscious made the leap from a YouTube video he had just seen on extracting a lost cork from a wine bottle to the realization that the same parlor trick could save a baby stuck in the birth canal.

Mr. Odón, 59, an Argentine car mechanic, built his first prototype in his kitchen, using a glass jar for a womb, his daughter’s doll for the trapped baby, and a fabric bag and sleeve sewn by his wife as his lifesaving device.
. . .
(p. A4) In a telephone interview from Argentina, Mr. Odón described the origins of his idea.
He tinkers at his garage, but his previous inventions were car parts. Seven years ago, he said, employees were imitating a video showing that a cork pushed into an empty bottle can be retrieved by inserting a plastic grocery bag, blowing until it surrounds the cork, and drawing it out.
. . .
With the help of a cousin, Mr. Odón met the chief of obstetrics at a major hospital in Buenos Aires. The chief had a friend at the W.H.O., who knew Dr. Merialdi, who, at a 2008 medical conference in Argentina, granted Mr. Odón 10 minutes during a coffee break.
The meeting instead lasted two hours. At the end, Dr. Merialdi declared the idea “fantastic” and arranged for testing at the Des Moines University simulation lab, which has mannequins more true-to-life than a doll and a jar.
Since then, Mr. Odón has continued to refine the device, patenting each change so he will eventually earn royalties on it.
. . .
Dr. Merialdi said he endorsed a modest profit motive because he had seen other lifesaving ideas languish for lack of it. He cited magnesium sulfate injections, which can prevent fatal eclampsia, and corticosteroids, which speed lung development in premature infants.
“But first, this problem needed someone like Jorge,” he said. “An obstetrician would have tried to improve the forceps or the vacuum extractor, but obstructed labor needed a mechanic. And 10 years ago, this would not have been possible. Without YouTube, he never would have seen the video.”