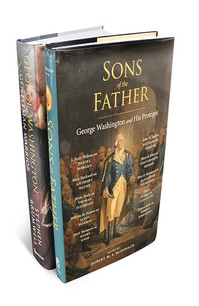 (p. A17) In “Sons of the Father: George Washington and His Protégés,” we can see how Washington’s ideas about character evolved over the course of the war and after. This collection of essays, edited by Robert M.S. McDonald, explores Washington’s relationships with a series of younger men.
. . .
Knox came to Washington’s attention in 1775 for his work on the defenses around Boston. His resourcefulness and keen interest in military science proved invaluable. When Washington allowed Knox to head for Fort Ticonderoga in hopes of retrieving some 50 British cannon captured by Ethan Allen, Knox succeeded against long odds. Over nine harrowing weeks, Mark Thompson writes, Knox and his men hauled 60 tons of artillery 300 miles “through the New York backcountry, along waterways and gullied roads, across ice and snow.” Deployed on Dorchester Heights overlooking Boston, the guns helped persuade the British to abandon the city. But Knox was far more than a herculean teamster. Washington put him in charge of all Continental artillery, and the batteries under his direction loomed large at Trenton, Princeton, Monmouth and Yorktown. After the war, Knox became Washington’s secretary of war.
Washington saw merit in the unprepossessing Knox, as he did in others, despite the lack of a “gentlemanly” pedigree. Forced as a child to support his mother when his father abandoned the family, Knox was a mere bookseller before the war, self-educated and obese. But he understood artillery and could see its role in sieges and in the mobile warfare that would characterize the Revolution. More than that, he could discuss its theory and application with Washington. Jefferson and Madison, in their more playful approach to ideas, complicated matters; Knox clarified them.

For the full review, see:
ALAN PELL CRAWFORD. “Bookshelf; A Few Men of Character.” The Wall Street Journal (Tues., Dec. 10, 2013): A17.
(Note: ellipsis added.)
(Note: the online version of the review has the date Dec. 9, 2013, and has the title “BOOKSHELF; Book Review: ‘George Washington: Gentleman Warrior,’ by Stephen Brumwell and ‘Sons of the Father,’ edited by Robert M.S. McDonald; By 1775, Washington had strong ideas about how to run an army. Officers, he said, should be men of independent financial means.”)