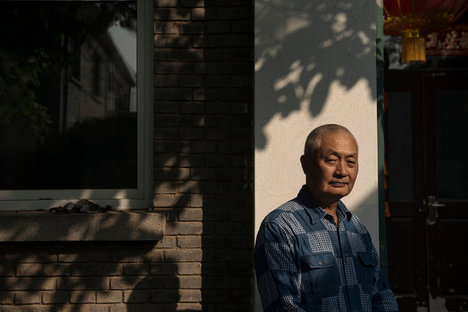 “”I was too scared. I couldn’t stop it. I was afraid of being called a counterrevolutionary, of having to wear a dunce’s hat.” CHEN XIAOLU” Source of caption and photo: online version of the NYT article quoted and cited below.

(p. A5) BEIJING — ON the surface, at least, there is not much about Chen Xiaolu to suggest a lifetime of regret.

The son of one of Communist China’s founding generals, he enjoyed privilege at an early age and then a career as a business consultant that took him around the world. Now 67, he relaxes on golf courses in Scotland and southern France and eschews the dark suits and high-maintenance black hair of most affluent Chinese men for casual shirts and a gray buzz cut.
But beneath the genial exterior is a memory that has haunted him for nearly 50 years. There he was, back in high school, a fresh-faced member of the volleyball team and a student leader in Mao Zedong’s Cultural Revolution, ordering teachers to line up in the auditorium, dunce caps on their bowed heads. He stood there, excited and proud, as thousands of students howled abuse at the teachers.
Then, suddenly, a posse stormed the stage and beat them until they crumpled to the floor, blood oozing from their heads. He did not object. He simply fled. “I was too scared,” he recalled recently in one of several interviews at a restaurant near Tiananmen Square, not far from his alma mater, No. 8 Middle School, which catered to the children of the Mao elite. “I couldn’t stop it. I was afraid of being called a counterrevolutionary, of having to wear a dunce’s hat.”
A ripple of confessions about the Cultural Revolution from former Red Guards, most of them retired men of modest backgrounds, has surfaced in the last few months. But it was Mr. Chen’s decision to step forward in August with a public apology that has drawn the most attention, raising hopes that a nation so determined to define its future might finally be moving to confront the horrors of its past.
He did so, he said, not only for personal redemption but also for profound reasons to do with China’s political development that must include the rule of law.
. . .
Mr. Chen’s remorse stands out because of his stature, then and now. He is quite candid that as the son of Chen Yi, a founder of Communist China and its longtime foreign minister, he was handed the mantle of immense authority during the decisive, early days of the Cultural Revolution.
. . .
THE Cultural Revolution remains largely hidden from view in China as successive governments have discouraged discussion of the turmoil and terror that Mao orchestrated to perpetuate his rule but that almost brought the country to its knees.
. . .
A particularly delicate subject for the party has been the number of people killed.
In Beijing alone, about 1,800 people died during August and September 1966, the height of the frenzy, when Mao first deployed students as Red Guards to turn against the party, according to the historians Roderick MacFarquhar and Michael Schoenhals. Estimates range from 1.5 million to three million dead across China from 1966 to 1976.
. . .
In a speech in early 1967, Chen Yi dared to criticize the Cultural Revolution. Mao sidelined him, and the man who had greeted every foreign leader to the new China was subjected to a humiliating self-criticism session and ordered to stay at home.

For the full story, see:
JANE PERLEZ. “THE SATURDAY PROFILE; A Leader in Mao’s Cultural Revolution Faces His Past.” The New York Times (Sat., December 7, 2013): A5.
(Note: ellipses added.)
(Note: the online version of the article has the date December 6, 2013.) 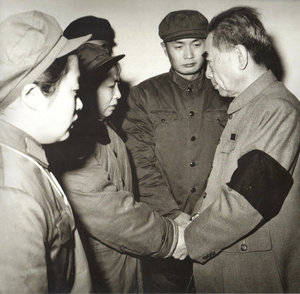 “Mr. Xiaolu [sic], center, with Zhou Enlai, right, in the early 1970s at a funeral.” Source of caption and photo: online version of the NYT article quoted and cited above.