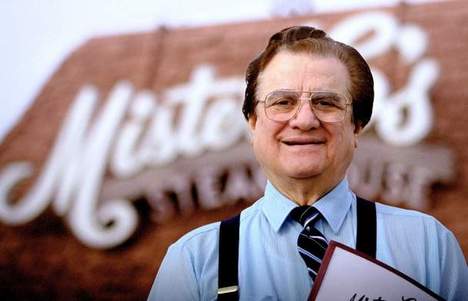 “In a 2000 photo, Sebastiano “Yano” Caniglia, a member of one of Omaha’s largest restaurant families, stands outside his Mister C’s Steakhouse, which operated from 1953 until 2007.” Source of caption and photo: online version of the Omaha World-Herald obituary quoted and cited below.

In the current draft of my book Openness to Creative Destruction, I use Mr. C as my example of a “free agent entrepreneur.” An evening at Mr. C’s was as much about spirit and experience and entertainment as it was about food. Mr. C’s was on the other side of town, but we tried to get there at least once a year, usually around the holidays. When my daughter was young, she would run over to the wonderful diorama that included Frank Sinatra, Mr. C, and the Pope. I remember the strolling violinist, the accordion player and the clown. And the time Mr. C stopped by our table to show us his singing potted flower. This time of year, I remember the thousands of small twinkling Christmas lights throughout the restaurant. Mr. C exuded a wonderful childlike enthusiasm and zest for life.

(p. 1B) “He was only at Hospice House for a few hours,” said his son. “He was singing to the nurses, telling them stories and ­having a wonderful day when he dropped.”
. . .
(p. 2B) David Caniglia said his father had a simple business model that included “good, old-fashioned hard work.”
“He was sincere when people came into the restaurant. They were more than just customers, they were coming into his home,” he said.
On the last day for Mister C’s, Yano Caniglia told The World-Herald: “I couldn’t wait to get to work every day. I never wanted it to end.”
A reporter in 1983 described Mr. C in his restaurant:
“If it was your first visit, you probably were still recovering from the dazzle of thousands of Christmas lights that festoon the place when he bustled up to your table, welcomed you in his booming voice and, if there were kids in your party, deftly twisted balloon animals for them.”

For the full obituary, see:
Sue Story Truax. “Man Behind Mister C’s Success, Sebastiano Caniglia, Dies at 89.” Omaha World-Herald (Friday, November 15, 2013): 1B-2B.
(Note: ellipsis added.)
(Note: the online version of the obituary has the date Thursday, November 14, 2013, and has the title “Yano Caniglia was the mister in Mr. C’s Steakhouse.”)