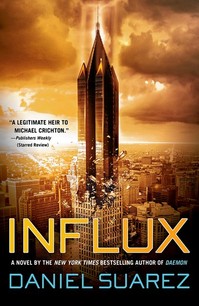 (p. D8) In “Influx,” . . . , a sinister Bureau of Technology Control kidnaps scientists that have developed breakthrough technologies (the cure to cancer, immortality, true artificial intelligence), and is withholding their discoveries from humanity, out of concern over the massive social disruption they would cause. “We don’t have a perfect record–Steve Jobs was a tricky one–but we’ve managed to catch most of the big disrupters before they’ve brought about uncontrolled social change,” says the head of the bureau, the book’s villain. The hero has developed a “gravity mirror” but refuses to cooperate, despite the best efforts of Alexa, who has been genetically engineered by the Bureau to be both impossibly sexy and brilliant.

In the publishing world, there is a growing sense that “Influx,” Mr. Suarez’s fourth novel, may be his breakout book and propel him into the void left by the deaths of Tom Clancy and Michael Crichton. “Influx’ has Mr. Suarez’s largest initial print run, 50,000 copies, and Twentieth Century Fox bought the movie rights last month.
An English major at the University of Delaware with a knack for computers, Mr. Suarez started a consulting firm in 1997, working with companies like Nestlé on complex production and logistics-planning issues. “You only want to move 100 million pounds of sugar once,” says Mr. Suarez, 49 years old.
He began writing in his free-time. Rejected by 48 literary agents–(a database expert, he kept careful track)–he began self-publishing in 2006 under the name Leinad Zeraus, his named spelled backward. His sophisticated tech knowledge quickly attracted a cult following in Silicon Valley, Redmond, Wash., and Cambridge, Mass. The MIT bookstore was the first bookstore to stock his self-published books in 2007. 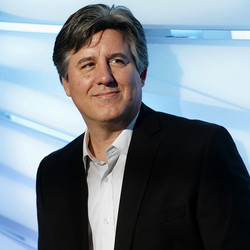 Author of Influx, Daniel Suarez. Source of photo: online version of the WSJ article quoted and cited above.