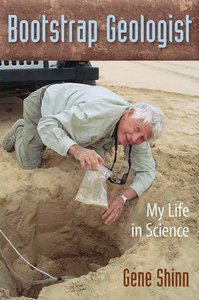 Source of caption and photo: online version of the NYT article quoted and cited below.

(p. D5) There is Big Science, defined as science that gets the big bucks. There is tried and true science, which, from an adventurous dissident’s point of view, is boldly going where others have gone before but extending the prevailing knowledge by a couple of decimal places (a safe approach for dissertation writers and grant seekers).

Then there is bootstrap science, personified by Gene Shinn, who retired in 2006 after 31 years with the United States Geological Survey and 15 years with a research arm of the Shell Oil Company.
. . .
Without a Ph.D. and often without much financing, Mr. Shinn published more than 120 peer-reviewed papers that helped change many experts’ views on subjects like how coral reefs expand and the underwater formation of limestone. Some of his papers, at odds with established scientific views, were initially rejected, only to be seen later as visionary.
His bootstrap ingredients included boundless curiosity, big ideas — “gee-whiz science,” he calls it — persistence, a sure hand at underwater demolition (dynamite was comparatively easy to come by in those remarkably innocent days) and versatility at improvising core-sampling equipment on tight budgets. The ability to enlist the talents of other scientists, many with doctorates, who shared his love of hands-on field work and his impatience with official rules and permits added to the mix.