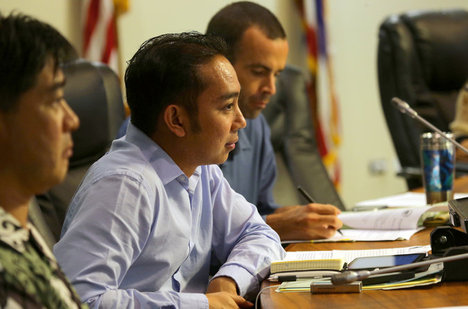 “Greggor Ilagan initially thought a ban on genetically modified organisms was a good idea.” Source of caption and photo: online version of the NYT article quoted and cited below.

(p. 1) KONA, Hawaii — From the moment the bill to ban genetically engineered crops on the island of Hawaii was introduced in May 2013, it garnered more vocal support than any the County Council here had ever considered, even the perennially popular bids to decriminalize marijuana.

Public hearings were dominated by recitations of the ills often attributed to genetically modified organisms, or G.M.O.s: cancer in rats, a rise in childhood allergies, out-of-control superweeds, genetic contamination, overuse of pesticides, the disappearance of butterflies and bees.
Like some others on the nine-member Council, Greggor Ilagan was not even sure at the outset of the debate exactly what genetically modified organisms were: living things whose DNA has been altered, often with the addition of a gene from a distant species, to produce a desired trait. But he could see why almost all of his colleagues had been persuaded of the virtue of turning the island into what the bill’s proponents called a “G.M.O.-free oasis.”
“You just type ‘G.M.O.’ and everything you see is negative,” he told his staff. Opposing the ban also seemed likely to ruin anyone’s re-election prospects.
Yet doubts nagged at the councilman, who was serving his first two-year term. The island’s papaya farmers said that an engineered variety had saved their fruit from a devastating disease. A study reporting that a diet of G.M.O. corn caused tumors in rats, mentioned often by the ban’s supporters, turned out to have been thoroughly debunked.
And University of Hawaii biologists urged the Council to consider the global scientific consensus, which holds that existing genetically engineered crops are no riskier than others, and have provided some tangible benefits.
“Are we going to just ignore them?” Mr. Ilagan wondered.
Urged on by Margaret Wille, the ban’s sponsor, who spoke passionately of the need to “act before it’s too late,” the Council declined to form a task force to look into such questions before its November vote. But Mr. Ilagan, 27, sought answers on his own. In the process, he found himself, like so many public and business leaders worldwide, wrestling with a subject in which popular beliefs often do not reflect scientific evidence.
. . .
(p. 19) Ms. Wille urged a vote for the ban. “To do otherwise,” she said, “would be to ignore the cries from round the world and on the mainland.”
“Mr. Ilagan?” the Council member leading the meeting asked when it came time for the final vote.
“No,” he replied.
The ban was approved, 6 to 3.
The mayor signed the bill on Dec. 5. 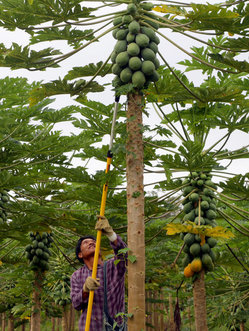 “Papaya genetically modified to resist a virus became one part of a controversy.” Source of caption and photo: online version of the NYT article quoted and cited above.