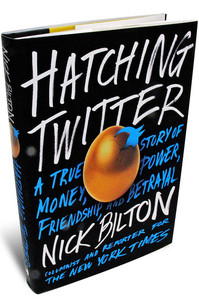 (p. 20) . . . “Hatching Twitter,” a fast-paced and perceptive new book by Nick Bilton, a columnist and reporter for The New York Times, establishes that uncertainty and dissension about its true purpose has characterized Twitter from its inception.
. . .
The company was financed by Williams, who made a bundle selling Blogger to Google and was intent on proving he wasn’t a one-hit wonder. It rose from the ashes of a failed podcasting enterprise, Odeo, which Williams had bankrolled as a favor to his friend Noah Glass. Bilton sketches the founders’ backgrounds and personalities in quick, skillful strokes that will serve the eventual screenwriter, director and storyboard artist well; these are characters made for the big screen.
None came from money. Ev Williams was a shy Nebraska farm boy whose parents never really understood their socially awkward, computer-obsessed son.
. . .
Having known hardship, none of the four founders were afraid of risk. To join the ill-fated Odeo, Stone walked away from a job at Google, leaving more than $2 million in unvested stock options on the table.
Twitter began with a conversation. Dorsey and Glass sat talking in a car one night in 2006 when Odeo was on the verge of collapse. Dorsey mentioned his “status concept,” which was inspired by AOL’s Instant Messenger “away messages” and LiveJournal status updates that people were using to mention where they were and what they were doing. Glass warmed to the idea, seeing it as a “technology that would erase a feeling that an entire generation felt while staring into their computer screens”: loneliness.