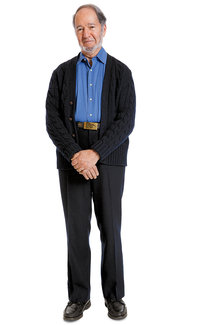 Jared Diamond. Source of photo: online version of the NYT article quoted and cited below.

(p. 12) Your latest book, “The World Until Yesterday,” is about traditional societies and your research in New Guinea. Why is the acronym Weird central to the book? In Weird — Western, Educated, Industrialized, Rich and Democratic — societies we take these things for granted that just didn’t exist anywhere in the world until a few thousand years ago. We encounter strangers, and it’s normal, and we don’t freak out and try to kill them. We eat food that somebody else grew for us. We have a government with police and lawyers to settle disputes.

. . .
. . . , the book has been criticized for saying traditional societies are very violent. Some people take a view of traditional society as being peaceful and gentle. But the proportional rate of violent death is much higher in traditional societies than in state-level societies, where governments assert a monopoly on force. During World War II, until Aug. 14, 1945, American soldiers who killed Japanese got medals. On Aug. 16, American soldiers who killed Japanese were guilty of murder. A state can end war, but a traditional society cannot.
People have called the book racist, saying it suggests third-world poverty is caused by environmental factors instead of imperialism and conquests. It’s clearly nonsense. It’s not as if people in certain parts of the world were rich until Europeans came along and they suddenly became poor. Before that, there were big differences in technology, military power and the development of centralized government around the world. That’s a fact.

For the full interview, see:
AMY CHOZICK, interviewer. “Talk; ‘New Guinean Kids Are Not Brats’; Jared Diamond on What We Can Learn from Traditional Societies.” The New York Times Magazine (Sun., JAN. 12, 2014): A12.
(Note: bold in original; ellipses added.)
(Note: the online version of the interview has the date JAN. 10, 2014, and has the title “Jared Diamond: ‘New Guinean Kids Are Not Brats’.”)

The book under discussion above is:
Diamond, Jared. The World until Yesterday: What Can We Learn from Traditional Societies? New York: Viking Penguin, 2012.