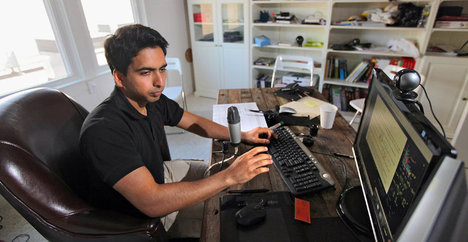 “Salman Khan at the offices of Khan Academy, which reaches more than 10 million users. Bill Gates invested in the school.” Source of caption and photo: online version of the NYT article quoted and cited below.

(p. D5) In 2008, Salman Khan, then a young hedge-fund analyst with a master’s in computer science from M.I.T., started the Khan Academy, offering free online courses mainly in the STEM subjects — science, technology, engineering and mathematics.

Today the free electronic schoolhouse reaches more than 10 million users around the world, with more than 5,000 courses, and the approach has been widely admired and copied. I spoke with Mr. Khan, 37, for more than two hours, in person and by telephone. What follows is a condensed and edited version of our conversations.
. . .
Did you have background as a math educator?
No, though I’ve had a passion for math my whole life. It got me to M.I.T. and enabled me to get multiple degrees in math and engineering. Long story shortened: Nadia got through what she thought she couldn’t. Soon word got around the family that “free tutoring” was going on, and I found myself working on the phone with about 15 cousins.
To make it manageable, I hacked together a website where my cousins could go to practice problems and I could suggest things for them to work on. When I’d tutor them over the telephone, I’d use Yahoo Doodle, a program that was part of Yahoo Messenger, so they could visualize the calculations on their computers while we talked.
The Internet videos started two years later when a friend asked, “How are you scaling your lessons?” I said, “I’m not.” He said, “Why don’t you make some videos of the tutorials and post them on YouTube?” I said, “That’s a horrible idea. YouTube is for cats playing piano.”
Still, I gave it try. Soon my cousins said they liked me more on YouTube than in person. They were really saying that they found my explanations more valuable when they could have them on demand and where no one would judge them. And soon many people who were not my cousins were watching. By 2008, I was reaching tens of thousands every month.
Youtube is a search engine where producers can upload short videos at no cost. Would the Khan Academy have been possible without this technology?
No. Before YouTube, the cost of hosting streaming videos was incredibly expensive. I wouldn’t have been able to afford the server space for that much video — or traffic. That said, I was probably the 500th person to show up on YouTube with educational videos. Our success probably had to do with the technology being ready and the fact that my content resonated with users.

For the full interview, see:
CLAUDIA DREIFUS, interviewer. “A Conversation With Salman Khan; It All Started With a 12-Year-Old Cousin.” The New York Times (Tues., JAN. 28, 2014): D5.
(Note: ellipsis added; bold in original; the first two paragraphs, and the bold questions, are Claudia Dreifus; the other paragraphs are Salman Khan.)
(Note: the online version of the interview has the date JAN. 27, 2014.)