(p. A13) Surely, some kind of ending is upon us. Last week climate protesters demanded the silencing of Charles Krauthammer for a Washington Post column that notices uncertainties in the global warming hypothesis. In coming weeks a libel trial gets under way brought by Penn State’s Michael Mann, author of the famed hockey stick, against National Review, the Competitive Enterprise Institute, writer Rand Simberg and roving commentator Mark Steyn for making wisecracks about his climate work. The New York Times runs a cartoon of a climate “denier” being stabbed with an icicle.
These are indications of a political movement turned to defending its self-image as its cause goes down the drain.

The Krauthammer column that the environmentalists do not want you to read:
Krauthammer, Charles. “The Myth of ‘Settled Science’.” The Washington Post (Fri., Feb. 21, 2014): A19. 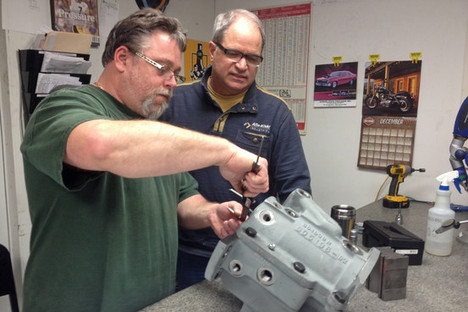 So was Carnegie suggesting that we should be open to the exceptional appearing in unexpected locations?

(p. 614) In his deed of trust, Carnegie declared that his research institution in Washington should “discover the exceptional man in every department of study whenever and where found… and enable him to make the work for which he seems specially designed his life work.” That notion would remain the driving philosophy behind the institution over the next century. Some of those “exceptional” scientists, supported by Carnegie money were the astronomer Edwin Hubble, who “revolutionized astronomy with his discovery that the universe is expanding,” and Barbara McClintock, whose work on patterns of genetic inheritance in corn won her a Nobel Prize. 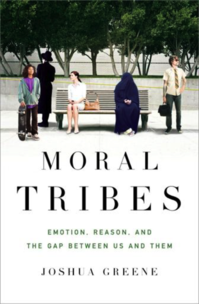 (p. C11) “Moral Tribes,” by Joshua Greene, explains the fascinating new field of moral neuroscience: what happens in our brains when we make moral judgments and how ancient impulses can warp our ethical intuitions. With the help of the parts of the brain that can engage in careful reasoning, the world’s peoples can find common ethical ground in a morality that maximizes human flourishing and minimizes suffering.

The book that Pinker praises is:
Greene, Joshua. Moral Tribes: Emotion, Reason, and the Gap between Us and Them. New York: The Penguin Press, 2013.

(p. D3) In a paper published in Topics in Cognitive Science, a team of linguistic researchers from the University of Tübingen in Germany used advanced learning models to search enormous databases of words and phrases.
Since educated older people generally know more words than younger people, simply by virtue of having been around longer, the experiment simulates what an older brain has to do to retrieve a word. And when the researchers incorporated that difference into the models, the aging “deficits” largely disappeared.
“What shocked me, to be honest, is that for the first half of the time we were doing this project, I totally bought into the idea of age-related cognitive decline in healthy adults,” the lead author, Michael Ramscar, said by email. But the simulations, he added, “fit so well to human data that it slowly forced me to entertain this idea that I didn’t need to invoke decline at all.”
. . .
Scientists who study thinking and memory often make a broad distinction between “fluid” and “crystallized” intelligence. The former includes short-term memory, like holding a phone number in mind, analytical reasoning, and the ability to tune out distractions, like ambient conversation. The latter is accumulated knowledge, vocabulary and expertise.
“In essence, what Ramscar’s group is arguing is that an increase in crystallized intelligence can account for a decrease in fluid intelligence,” said Zach Hambrick, a psychologist at Michigan State University. In a variety of experiments, Dr. Hambrick and Timothy A. Salthouse of the University of Virginia have shown that crystallized knowledge (as measured by New York Times crosswords, for example) climbs sharply between ages 20 and 50 and then plateaus, even as the fluid kind (like analytical reasoning) is dropping steadily — by more than 50 percent between ages 20 and 70 in some studies. “To know for sure whether the one affects the other, ideally we’d need to see it in human studies over time,” Dr. Hambrick said.

One of the papers by Hambrick and Salthouse that discusses crystallized knowledge is:
Hambrick, David Z., and Timothy A. Salthouse. “Predictors of Crossword Puzzle Proficiency and Moderators of Age-Cognition Relations.” Journal of Experimental Psychology, General 128, no. 2 (June 1999): 131-64. 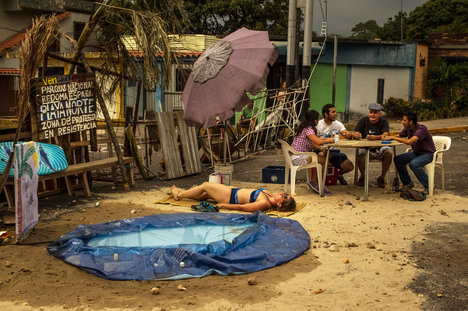 “Antigovernment protesters blocking a street in San Cristóbal, in western Venezuela, decorated their barrier like a beach scene.” Source of caption and photo: online version of WILLIAM NEUMAN. “Slum Dwellers in Caracas Ask, What Protests?” The New York Times (Sat., March 1, 2014): A1 & A8.

(p. A6) CARACAS, Venezuela–President Nicolás Maduro declared an extended Carnival holiday season, betting that sun, sand and rum will help calm the worst civil unrest to sweep the oil-rich nation in more than a decade.

As some opposition leaders called to cancel the celebrations to mourn those who died in recent weeks during protests, Mr. Maduro’s ministers publicly encouraged Venezuelans to hit the beach for the pre-Lent festivities.
. . .
Among those officials most visible to the public these days has been Tourism Minister Andres Izarra, who has been hitting tourist hot spots with a campaign called “Carnival 2014–The Coolest Holiday.”
He said that officials were opening 180 tourist information centers for the long holiday weekend and increasing maintenance and trash pickup at beaches that are often covered with empty alcohol containers. Meanwhile, the transportation minister, Haiman El Troudi, said new bus routes would be added to get Venezuelans to the beach. 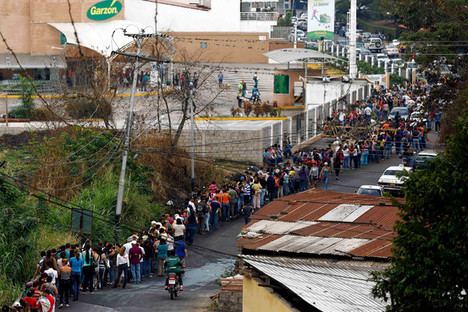 “PARTY LINE: Venezuela President Nicolás Maduro, reeling from weeks of protests, called for Carnival season to begin early, and his ministers urged Venezuelans to hit the beach. But the crumbling economy and food shortages created scenes such as the lines at a supermarket.” Source of caption and photo: online version of the WSJ article quoted and cited above. 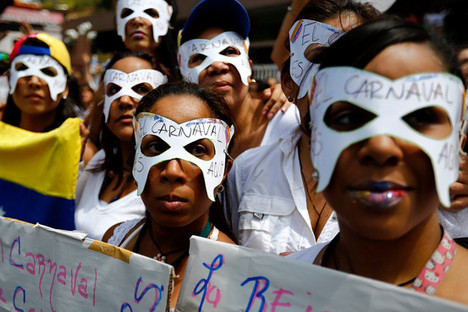 “Opposition demonstrators wearing Carnival masks take part in a women’s rally against Nicolás Maduro’s government in Caracas on Wednesday.” Source of caption and photo: online version of the WSJ article quoted and cited above.

But notice that the two main examples of what Carnegie himself chose to fund (the Wilson Observatory and the yacht to collect geophysical data), were empirically oriented, not theoretically oriented.

(p. 480) Carnegie was, as Harvard President James Bryant Conant would comment in 1935 on the centenary of his birth, “more than a generation ahead of most business men of this country [in understanding] the importance of science to industry.” He recognized far better than his peers how vital basic scientific research was to the applied research that industry fed off. George Ellery Hale, an astronomer and astrophysicist, later to be the chief architect of the National Research Council, was astounded when he learned of Carnegie’s commitment to pure research. “The provision of a large endowment solely for scientific research seemed almost too good to be true…. Knowing as I did the difficulties of obtaining money for this purpose and (p. 481) devoted as I was to research rather than teaching, I could appreciate some of the possibilities of such an endowment.” Hale applied for funds to build an observatory on Mount Wilson in California, and got what he asked for. It would take until 1909 to build and install a 60-inch reflecting telescope in the observatory; in 1917, a second 100-inch telescope, the largest in the world, was added.

The Mount Wilson Observatory– and the work of its astronomers and astrophysicists– was only one of the projects funded in the early years of the new institution. Another, of which Carnegie was equally proud, was the outfitting of the Carnegie, an oceangoing yacht with auxiliary engine, built of wood and bronze so that it could collect geophysical data without the errors inflicted on compass readings by iron and steel. The ship was launched in 1909; by 1911, Carnegie could claim that the scientists on board had already been able to correct several significant errors on navigational maps.

Source:
Nasaw, David. Andrew Carnegie. New York: Penguin Press, 2006.
(Note: ellipsis, and italics, in original.)
(Note: the pagination of the hardback and paperback editions of Nasaw’s book are the same.)