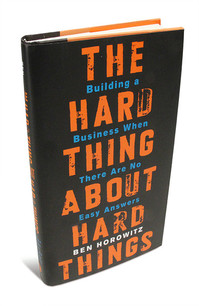 (p. A13) Every entrepreneur has experienced what Ben Horowitz terms “the struggle.” That’s when things are going really, really badly. It’s when, as he puts it in “The Hard Thing About Hard Things,” “people ask you why you don’t quit and you don’t know the answer.” But there always is a way, Mr. Horowitz believes, and it’s the ability to spot the next move during the struggle that separates winners and losers.

Mr. Horowitz has authority on this subject. He was a successful tech CEO, having co-founded the pioneering cloud-computing company LoudCloud and subsequently overseen its evolution into a software firm, Opsware. He’s also one half of the venture-capital firm Andreessen Horowitz. Among the firm’s winning bets: Facebook, Skype and Twitter.
. . .
The book, the author says, is written primarily for “wartime CEOs”–those like the late Steve Jobs, who returned to Apple in 1997 at a time when the company was verging on bankruptcy. Jobs recognized that to survive, Apple had to ditch most of its products and focus singularly on just four computer models.
Wartime CEOs don’t need classic management books that “focus on how to do things correctly, so you don’t screw up,” Mr. Horowitz argues. What the author offers instead is “insight into what you must do after you have screwed up. The good news is, I have plenty of experience at that and so does every other CEO.”
. . .
Parts of the book are dedicated to providing practical leadership advice: how to hire, fire and scale and when to sell and when to spurn offers. Some of the advice is counterintuitive. He dismisses the “don’t bring me a problem without bringing me a solution” management maxim by asking: If an employee can’t solve the problem he encounters, do you really want him to hide it?

The book under review is:
Horowitz, Ben. The Hard Thing About Hard Things: Building a Business When There Are No Easy Answers. New York: HarperCollins Publishers, 2014.