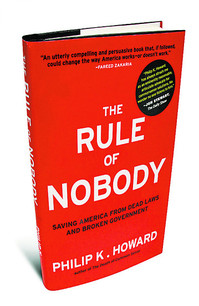 (p. A13) The rulebooks should be “radically simplified,” Mr. Howard says, on matters ranging from enforcing school discipline to protecting nursing-home residents, from operating safe soup kitchens to building the nation’s infrastructure: Projects now often require multi-year, 5,000-page environmental impact statements before anything can begin to be constructed. Unduly detailed rules should be replaced by general principles, he says, that take their meaning from society’s norms and values and embrace the need for official discretion and responsibility.

Mr. Howard serves up a rich menu of anecdotes, including both the small-scale activities of a neighborhood and the vast administrative structures that govern national life. After a tree fell into a stream and caused flooding during a winter storm, Franklin Township, N.J., was barred from pulling the tree out until it had spent 12 days and $12,000 for the permits and engineering work that a state environmental rule required for altering any natural condition in a “C-1 stream.” The “Volcker Rule,” designed to prevent banks from using federally insured deposits to speculate in securities, was shaped by five federal agencies and countless banking lobbyists into 963 “almost unintelligible” pages. In New York City, “disciplining a student potentially requires 66 separate steps, including several levels of potential appeals”; meanwhile, civil-service rules make it virtually impossible to terminate thousands of incompetent employees. Children’s lemonade stands in several states have been closed down for lack of a vendor’s license.

The book under review is:
Howard, Philip K. The Rule of Nobody: Saving America from Dead Laws and Broken Government. New York: W. W. Norton & Co., 2014.