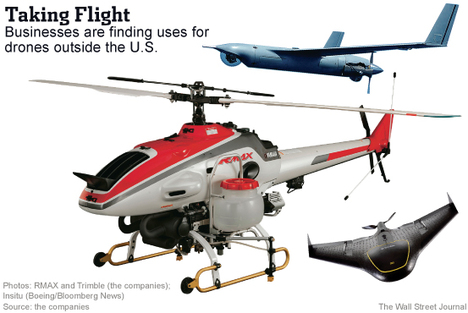 Three sophisticated drones. From top to bottom, the Insitu ScanEagle, the Yamaha RMAX, and the Trimble UX5. Source and photo: online version of the WSJ article quoted and cited below.

(p. B1) After Greek land surveyor George Papastamos bought his first drones a year ago, he let go most of his workers. Now, instead of a team of 12, he shows up to work sites with just a drone and an assistant.

“I could see this was the future,” said Mr. Papastamos, a second-generation surveyor from Athens. The drones have improved his maps and lowered his costs, enabling him to win more business. “It is much, much more profitable,” he said.
As U.S. regulators and courts grapple with when and how to allow the use of drones for commercial purposes, flying robots already are starting to change the way companies do business in countries from Australia to Japan to the U.K. They are showing the potential to provide cheaper and more effective alternatives to manned aircraft–and human workers–in industries like mining, construction and filmmaking.
The U.S. is “the world leader in producing drones,” but “the reality is the rest of the world has moved further ahead of us in terms of commercial applications,” said drone researcher Missy Cummings, director of the Humans and Autonomy Lab at Duke University.

For the full story, see:
JACK NICAS. “From Farms to Films, Drones Find Commercial Uses.” The Wall Street Journal (Tues., March 11, 2014): B1 & B6.
(Note: the online version of the story has the date March 10, 2014, and has the title “Drones Find Fans Among Farmers, Filmmakers; FAA Still Debating Rules but Drones are Spraying 40% of Japan’s Rice Fields.”)