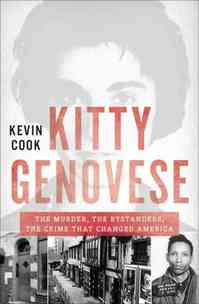 (p. C7) The Kitty Genovese myth has turned out to be as enduring an urban legend as the tale of alligators prowling the New York sewers. In March 1964 the young Queens bar manager was stabbed to death at three in the morning outside her Kew Gardens apartment while 38 neighbors watched from their windows and did nothing to save her–or so the tale has gone for the past half-century.

In fact, hardly anything about the Genovese story is what it first appeared to be, although it has calcified into a metaphor of urban alienation and prompted research into a psychological phenomenon that has come to be known as the “Genovese syndrome.” As Kevin Cook writes in his heavily padded but provocative new book, “Kitty Genovese: The Murder, the Bystanders, the Crime That Changed America,” the tale is as much about the alchemy of journalism as urban pathology.
. . .
. . . , as it turns out, only a few neighbors understood the attack for what it was and failed to respond.
. . .
Journalism is a blunt instrument, and allowances must be made. Even so, it’s plain that the original story was more hype than first draft of history.