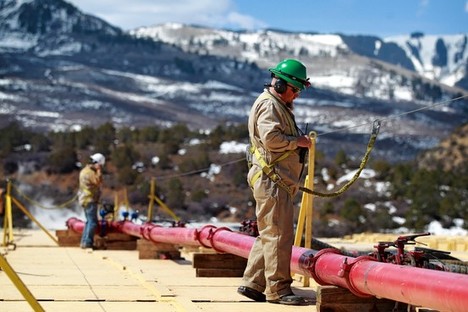 “A worker at a hydraulic fracturing and extraction operation in western Colorado on March 29[, 2014].” Source of caption and photo: online version of the WSJ article quoted and cited below.

Over the past five years of business history, two events have shocked and transformed the nation. In 2007 and 2008, the housing market crumbled and the financial system collapsed, causing trillions of dollars of losses. Around the same time, a few little-known wildcatters began pumping meaningful amounts of oil and gas from U.S. shale formations. A country that once was running out of energy now is on track to become the world’s leading producer.
What’s most surprising about both events is how few experts saw them coming–and that a group of unlikely outsiders somehow did.
. . .
Less well known, but no less dramatic, is the story of America’s energy transformation, which took the industry’s giants almost completely by surprise. In the early 1990s, an ambitious Chevron executive named Ray Galvin started a group to drill compressed, challenging formations of shale in the U.S. His team was mocked and undermined by dubious colleagues. Eventually, Chevron pulled the plug on the effort and shifted its resources abroad.
Exxon Mobil also failed to focus on this rock–even though its corporate headquarters in Irving, Texas, were directly above a huge shale formation that eventually would flow with gas. Later, it would pay $31 billion to buy a smaller shale pioneer.
“I would be less than honest if I were to say to you [that] we saw it all coming, because we did not, quite frankly,” Rex Tillerson, Exxon Mobil’s chairman and CEO said last year in an interview at the Council on Foreign Relations.
. . .
The resurgence in U.S. energy came from a group of brash wildcatters who discovered techniques to hydraulically fracture–or frack–and horizontally drill shale and other rock. Many of these men operated on the fringes of the oil industry, some without college degrees or much background in drilling, geology or engineering.

For the full commentary, see:
GREGORY ZUCKERMAN. “ESSAY; The Little Guys Who Saw Our Economic Future; Corporate Caution and Complacency Come at a Cost.” The Wall Street Journal (Sat., Nov. 2, 2013): C3.
(Note: ellipsis, and bracketed year in caption, added.)
(Note: the online version of the commentary was updated Nov. 3, 2013, and has the title “ESSAY; The Outsiders Who Saw Our Economic Future; In both America’s energy transformation and the financial crisis, it took a group of amateurs to see what was coming.” )

Zuckerman’s commentary, quoted above, is partly based on his book:
Zuckerman, Gregory. The Frackers: The Outrageous inside Story of the New Billionaire Wildcatters. New York: Portfolio/Penguin, 2013.