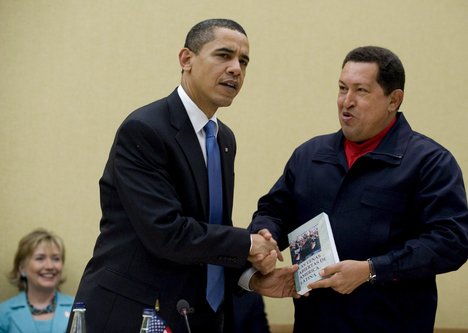 “Hugo Chávez, president of Venezuela, handing President Obama a copy of Eduardo Galeano’s “The Open Veins of Latin America” in 2009.” Source of caption and photo: online version of the NYT article quoted and cited below.

(p. C1) For more than 40 years, Eduardo Galeano’s “The Open Veins of Latin America” has been the canonical anti-colonialist, anti-capitalist and anti-American text in that region. Hugo Chávez, Venezuela’s populist president, even put a copy of the book, which he had called “a monument in our Latin American history,” in President Obama’s hands the first time they met. But now Mr. Galeano, a 73-year-old Uruguayan writer, has disavowed the book, saying that he was not qualified to tackle the subject and that it was badly written. . . .

” ‘Open Veins’ tried to be a book of political economy, but I didn’t yet have the necessary training or preparation,” Mr. Galeano said last month while answering questions at a book fair in Brazil, where he was being honored on the 43rd anniversary of the book’s publication. He added: “I wouldn’t be capable of reading this book again; I’d keel over. For me, this prose of the traditional left is extremely leaden, and my physique can’t tolerate it.”
. . .
(p. C6) In the United States, “Open Veins” has been widely taught on university campuses since the 1970s, in courses ranging from history and anthropology to economics and geography. But Mr. Galeano’s unexpected takedown of his own work has left scholars wondering how to deal with the book in class.
. . .
In the mid-1990s, three advocates of free-market policies — the Colombian writer and diplomat Plinio Apuleyo Mendoza, the exiled Cuban author Carlos Alberto Montaner and the Peruvian journalist and author Álvaro Vargas Llosa — reacted to Mr. Galeano with a polemic of their own, “Guide to the Perfect Latin American Idiot.” They dismissed “Open Veins” as “the idiot’s bible,” and reduced its thesis to a single sentence: “We’re poor; it’s their fault.”
Mr. Montaner responded to Mr. Galeano’s recent remarks with a blog post titled “Galeano Corrects Himself and the Idiots Lose Their Bible.” In Brazil, Rodrigo Constantino, the author of “The Caviar Left,” took an even harsher tone, blaming Mr. Galeano’s analysis and prescription for many of Latin America’s ills. “He should feel really guilty for the damage he caused,” he wrote on his blog. 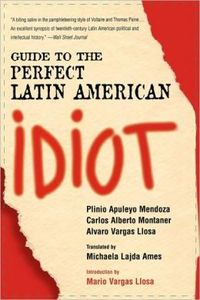