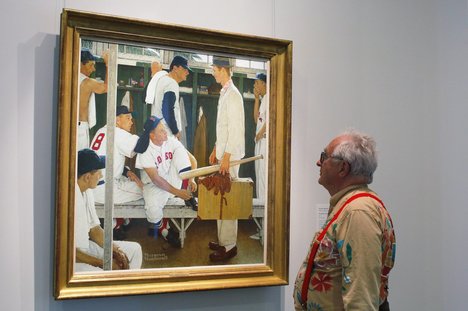 “Peter Rockwell, son of Norman Rockwell, with “The Rookie,” which sold for $22.5 million on Thursday [May 22, 2014].” Source of caption and photo: online version of the NYT article quoted and cited below.

(p. B1) “Rockwell’s greatest sin as an artist is simple: His is an art of unending cliché.”

In that Washington Post criticism of a 2010 exhibition of Norman Rockwell paintings at the Smithsonian, Blake Gopnik joined a long line of prominent critics attacking Rockwell, the American artist and illustrator who depicted life in mid-20th-century America and died in 1978.
“Norman Rockwell was demonized by a generation of critics who not only saw him as an enemy of modern art, but of all art,” said Deborah Solomon, whose biography of Rockwell, “American Mirror,” was published last year. “He was seen as a lowly calendar artist whose work was unrelated to the lofty ambitions of art,” she said, or, as she put it in her book, “a cornball and a square.” The critical dismissal “was obviously a source of great pain throughout his life,” Ms. Solomon, a frequent contributor to The New York Times, added.
But Rockwell is now undergoing a major critical and financial reappraisal. This week, the major auction houses built their spring sales of American art around two Rockwell paintings: “After the Prom,” at Sotheby’s, and “The Rookie,” at Christie’s. “After the Prom” sold for $9.1 million on Wednesday; “The Rookie” for $22.5 million on Thursday.
. . .
(p. B5) Rockwell also gained a Hollywood stamp of approval. Two of the country’s most famous film directors, George Lucas (“Star Wars”) and Steven Spielberg (“E.T.”) were acquiring Rockwells. Rockwell “is a great story teller, and he used cinematic devices,” Mr. Lucas told an interviewer for the Smithsonian, which mounted the exhibition of his and Mr. Spielberg’s Rockwell collections, “Telling Stories,” in 2010. “He ‘cast’ a painting,” Mr. Lucas said. “It wasn’t just a random group of characters.”
Others, too, were discovering new depths in Rockwell’s work. “What distinguishes the best of his works for me,” Ms. Solomon said, “is that they’re rooted in real emotion. They’re not just a one-liner. Take ‘The Rookie,’ which is a great painting. It captures the tension between generations, when a rookie, a youngster, arrives, and the veterans realize they’ve just met their replacement. Their time is limited. It doesn’t matter if it’s baseball players, or newspaper reporters, or firefighters. It’s about time and how one generation replaces another.”
Laurie Norton Moffatt, director of the Norman Rockwell Museum in Stockbridge, Mass., observed: “What we’re seeing in the marketplace is that collectors, in a sense, are catching up with the incredible quality and enduring meaning and message in Rockwell’s paintings. There are a handful of his works that have iconic resonance, enduring meaning, and those pieces are what we’re seeing really take off in the marketplace.”
. . .
What would Rockwell himself make of this? “He would be incredulous,” Ms. Solomon said. The consummate modest man, he was content to be paid by his magazine employers, and never pursued the gallery scene. He often gave away his paintings to family, friends, co-workers or neighbors.
He sold one of his most famous images, “Town Meeting,” an oil study for “Freedom of Speech,” to the Metropolitan Museum of Art in 1952 for $100, and, according to The Saturday Evening Post, let out a “gladsome yelp” when he learned the Met had bought it. It was the first museum to buy one of his works.
But some things haven’t changed. The painting is nowhere to be seen in the Met’s recently expanded and reorganized American wing. The museum’s website says simply: “Not on view.” (The museum didn’t respond to a request for comment.)