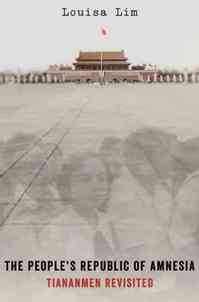 (p. 21) During the night of June 3-4, 1989, when the Chinese Army was slaughtering demonstrators in Tiananmen Square, Wang Nan, a young student, was shot in the head. As he lay dying at the side of the road, soldiers threatened to kill anyone, even some young doctors, who tried to help him. In the morning, finally dead, he was buried in a shallow grave nearby. A few days later, the smell of Wang Nan’s body was so great that it was dug up and moved to a hospital.

After 10 days, his mother, Zhang Xianling, was called to the hospital to identify her son’s body. It took eight months, in the face of official obstruction, for Zhang to uncover what had happened to her son. In 1998 she held a modest remembrance service on the spot where he had died. The next year, on that day, she was barred from leaving her apartment. When she met Louisa Lim, Zhang said she longed to go to the fatal place again to pour a libation on the ground and sprinkle flower petals. “However,” Lim observes, ­”someone will always be watching her. A closed-circuit camera has been installed” and “trained on the exact spot where her son’s body was exhumed. . . . It is a camera dedicated to her alone, waiting for her in case she should ever try again to mourn her dead son.”
Until I read about that camera in “The People’s Republic of Amnesia,” I imagined, after decades of reporting from and about China, that nothing there could still shock me. As Lim contends, Zhang’s “simple act of memory is deemed a threat to stability.” Lim’s overwhelming evidence of the leaders’ “moral vulnerability,” together with her accounts of the amnesia of many Chinese, make hers one of the best analyses of the impact of Tiananmen throughout China in the years since 1989. 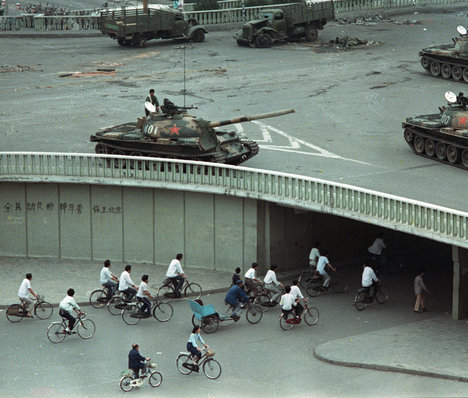 “Tanks at the ready in Beijing on June 6, 1989, two days after the Tiananmen Square massacre.” Source of caption and photo: online version of the NYT review quoted and cited above.