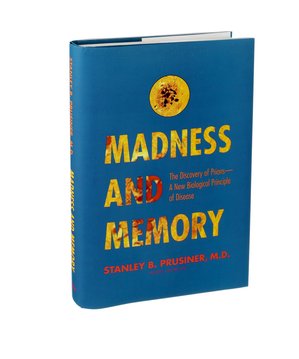 (p. D5) As the Nobel committee put it in the 1997 citation for Dr. Prusiner’s prize in physiology or medicine, he had established “a novel principle of infection” — one so controversial that a few experts in the field still continue to search for that elusive virus. But as far as Dr. Prusiner is concerned, the Nobel confirmed that his long, lonely odyssey “from heresy to orthodoxy” was over.

The journey he details was full of hurdles. Some were of the kind likely to befall any researcher: insufficient laboratory space, poor correlation between needs and resources. (At one point, Dr. Prusiner calculated that for a single year’s worth of experiments he would have to house and feed 72,000 mice, an impossible multimillion-dollar proposition.) He submitted a grant application that was not just rejected for funding but actually “disapproved,” often the kiss of death for a train of scientific thought.
Some of his problems were a little darker but still universal — graduate students captured by competing labs, data appropriated and misrepresented by erstwhile colleagues, bitter authorship battles.
Some of Dr. Prusiner’s shoals, however, seem more particular to his personal operating style. As a teenager he was blessed with what he describes as indefatigable self-confidence, and this trait apparently endures, to the considerable irritation of others.

The book under review is:
Prusiner, Stanley B. Madness and Memory: The Discovery of Prions–a New Biological Principle of Disease. New Haven, CT: Yale University Press, 2014.