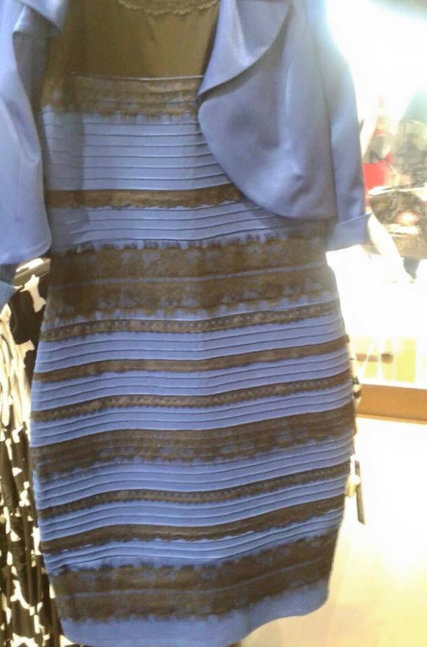 “The dress in a photo from Caitlin McNeill’s Tumblr site.” Source of caption and photo: online version of the NYT article quoted and cited below.

(p. B1) The mother of the bride wore white and gold. Or was it blue and black?

From a photograph of the dress the bride posted online, there was broad disagreement. A few days after the wedding last weekend on the Scottish island of Colonsay, a member of the wedding band was so frustrated by the lack of consensus that she posted a picture of the dress on Tumblr, and asked her followers for feedback.
“I was just looking for an answer because it was messing with my head,” said Caitlin McNeill, a 21-year-old singer and guitarist.
. . .
Less than a half-hour after Ms. McNeil’s original Tumblr post, Buzzfeed posted a poll: “What Colors Are This Dress?” As of Friday afternoon, it had (p. B5) been viewed more than 28 million times. (White and gold was winning handily.)
. . .
Politicians were eager to stake out their positions. “I know three things,” wrote Senator Christopher Murphy, a Connecticut Democrat, on Twitter. “1) the ACA works; 2) climate change is real; 3) that dress is gold and white.”
Sorry, senator. The dress, as we all now know, is blue and black. It goes for 50 pounds at Roman Originals, a British retailer.
. . .
Various theories were floated about why the dress looks different to different people. (No, if you see the darker hues of blue and black it doesn’t mean that you are depressed.)
Duje Tadin, associate professor for brain and cognitive sciences at the University of Rochester, says it may be because of variations in the number of photoreceptors called cones in the retina that perceive the color blue. The human eye has about six million cones that are sensitive to green, red or blue. Signals from the cones go to the brain, which interprets them as color.
“It’s puzzling,” conceded Dr. Tadin. “When it comes to color, blue is always the weird one. We have the fewest number of blue cones.” He added, “If you don’t have very many blue cones, you may see it as white, or if you have plenty of blue cones, you may see more blue.”
. . .
The one thing scientists could agree on was that this is a very unusual illusion. People who see the dress one way do not eventually begin to see it the other way, as is common with many optical illusions. “This clearly has to do with individual differences in how we perceive the world,” said Dr. Tadin. “There’s something about this particular image that just captures those differences in a remarkable way.