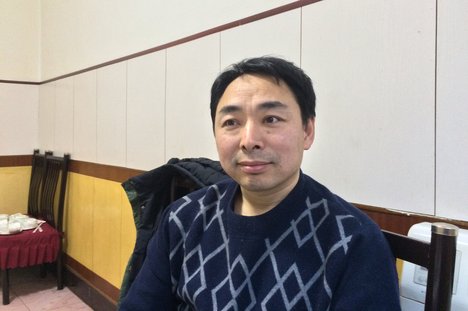 “Yang Zili of the Transition Institute of Social and Economic Research went into hiding.” Source of caption and photo: online version of the NYT article quoted and cited below.

(p. A4) BEIJING — First, the police took away the think tank’s former graphic designer, then the young man who organized seminars, and eventually its founder. Another employee fled China’s capital, fearing he would be forced to testify against his colleagues in rigged trials.

“The anxiety is overwhelming, not knowing if they are coming for you,” said the employee, Yang Zili, a researcher at the Transition Institute of Social and Economic Research in Beijing, who has been in hiding since November. “It’s frightening because as they disappear, one friend after another, the police are not following any law. They just do as they please.”
These are perilous days for independent civic groups in China, especially those that take on politically contentious causes like workers’ rights, legal advocacy and discrimination against people with AIDS. Such groups have long struggled to survive inside China’s ill-defined, shifting margins of official tolerance, but they have served as havens for socially committed citizens.
Under President Xi Jinping, however, the Communist Party has forcefully narrowed the bounds of accepted activity, setting off fears that these pockets of greater openness in China’s generally restrictive political landscape may soon disappear.
. . .
The campaign has focused on groups deemed sanctuaries for dissent. From its cramped offices in the university district of northwest Beijing, the Transition Institute championed a mix of free market economics and support for the downtrodden, conducting research on the exploitation of taxi drivers, school policies that shortchange rural children and the environmental costs of the massive Three Gorges Dam on the Yangtze River. But the institute also attracted advocates of democratic reform, some of whom had prior run-ins with the authorities.
“We always hoped to eke out survival in tough circumstances,” said Mr. Yang, 43, the researcher now in hiding, who spent eight years in prison for holding informal discussions with a group of friends about multiparty elections and a free press. “But the more independent NGOs,” he added, referring to nongovernmental organizations, “especially the ones that criticize government policies or don’t help the government’s image, have encountered a policy of containment, even destruction.”
. . .
(p. A6) With his colleagues disappearing one by one, Mr. Yang decided to go underground. He was in the institute office one morning in late November when a police officer called and told him to go to a station for questioning. Instead, Mr. Yang left an Internet message for his wife, shut off his cellphone, and slipped away, taking only the clothes on his back. “It was a spur-of-the-moment decision,” he said in an interview.
Meeting with a reporter at a location several hours’ drive from Beijing, he said he missed his wife and 4-year-old son, and visibly nervous, he talked about his fear of being returned to prison.
Mr. Yang said he would turn himself in should a warrant be issued for his arrest, but he was not interested in cooperating with what he described as an extralegal persecution of his colleagues.
“I still don’t understand what we did wrong,” he said. “We were just trying to help improve China.”