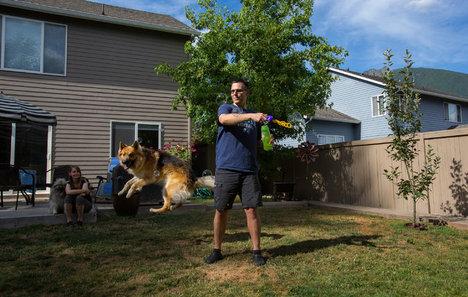 (p. A12) But scientists who champion the study of aging’s basic biology — they call it “geroscience” — say their field has received short shrift from the biomedical establishment. And it was not lost on the University of Washington researchers that exposing dog lovers to the idea that aging could be delayed might generate popular support in addition to new data.
“Many of us in the biology of aging field feel like it is underfunded relative to the potential impact on human health this could have,” said Dr. Kaeberlein, who helped pay for the study with funds he received from the university for turning down a competing job offer. “If the average pet owner sees there’s a way to significantly delay aging in their pet, maybe it will begin to impact policy decisions.”
The idea that resources might be better spent trying to delay aging rather than to cure diseases flies in the face of most disease-related philanthropy and the Obama administration’s proposal to spend $1 billion on a “cancer moonshot.” And many scientists say it is still too unproven to merit more investment.
The National Institutes of Health has long been organized around particular diseases, including the National Cancer Institute and the National Institute of Diabetes and Digestive and Kidney Diseases. There is the National Institute on Aging, but about a third of its budget last year was directed exclusively to research on Alzheimer’s disease, and its Division of Aging Biology represents a tiny fraction of the N.I.H.’s $30 billion annual budget. That is, in part, because the field is in its infancy, said the N.I.H. director, Dr. Francis Collins.
. . .
“The squirrels in my neighborhood have a 25-year life span, but they look like rats that live two years,” said Gary Ruvkun, a pioneer in aging biology at Harvard Medical School. “If you look at what nature has selected for and allowed, it suggests that you might be able to get your hands on the various levers that change things.”
. . .
Over 1,500 dog owners applied to participate in the trial of rapamycin, which has its roots in a series of studies in mice, the first of which was published in 2009. Made by a type of soil bacterium, rapamycin has extended the life spans of yeast, flies and worms by about 25 percent.
But in what proved a fortuitous accident, the researchers who set out to test it in mice had trouble formulating it for easy consumption. As a result, the mice were 20 months old — the equivalent of about 60 human years — when the trial began. That the longest-lived mice survived about 12 percent longer than the control groups was the first indication that the drug could be given later in life and still be effective.
Dr. Kaeberlein said he had since achieved similar benefits by giving 20-month-old mice the drug for only three months. (The National Institute on Aging rejected his request for funding to further test that treatment.) Younger mice, given higher doses, have lived about 25 percent longer than those not given the drug, and mice of varying ages and genetic backgrounds have been slower to develop some cancers, kidney disease, obesity and symptoms of Alzheimer’s disease. In one study, their hearts functioned better for longer.
“If you do the extrapolation for people, we’re probably talking a couple of decades, with the expectation that those years are going to be spent in relatively good health,” Dr. Kaeberlein said.
. . .
. . . what dog lovers have long considered the sad fact that their pets age about seven times as fast as they do, Dr. Kaeberlein knew, would be a boon for a study of rapamycin that would have implications for both species. An owner of two dogs himself, he was determined to scrounge up the money for the pilot phase of what he and Dr. Promislow called the Dog Aging Project.
Last month, he reported at a scientific meeting that no significant side effects had been observed in the dogs, even at the highest of three doses. And compared with the hearts of dogs in the control group, the hearts of those taking the drug pumped blood more efficiently at the end. The researchers would like to enroll 450 dogs for a more comprehensive five-year study, but do not yet have the money.
Even if the study provided positive results on all fronts, a human trial would carry risks.
Dr. Kaeberlein, for one, said they would be worth it.
“I would argue we should be willing to tolerate some level of risk if the payoff is 20 to 30 percent increase in healthy longevity,” he said. “If we don’t do anything, we know what the outcome is going to be. You’re going to get sick, and you’re going to die.”

An academic paper that discusses the wide variability in life span of different species in the order Rodentia (which includes short-lived rats and long-lived squirrels), is:
Gorbunova, Vera, Michael J. Bozzella, and Andrei Seluanov. “Rodents for Comparative Aging Studies: From Mice to Beavers.” Age 30, no. 2-3 (June 25, 2008): 111-19.