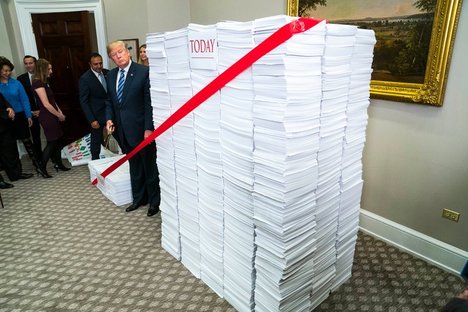 “President Trump described his administration’s deregulation efforts in remarks at the White House on Thursday. He then stood between two piles of paper representing government regulations in 1960, (20,000 pages, he said), and today — a pile that was about six feet tall (said to be 185,000 pages).” Source of caption and photo: online version of the NYT article quoted and cited below.

(p. A22) WASHINGTON — President Trump said on Thursday that his administration was answering “a call to action” by rolling back regulations on environmental protections, health care, financial services and other industries as he made a push to showcase his accomplishments near the end of his first year in office.
The remarks highlighted an area where Mr. Trump has perhaps done more to change the policies of his predecessor than any other, with regulatory shifts that have affected wide sections of the economy.
. . .
Echoing his days as a real estate developer with the flair of a groundbreaking, Mr. Trump used an oversize pair of scissors to cut a ribbon his staff had set up in front of two piles of paper, representing government regulations in 1960 (20,000 pages, he said), and today — a pile that was about six feet tall (said to be 185,000 pages).
. . .
. . . , several economic indicators — and comments from companies large and small — suggest that a shift in federal regulatory policy is building business confidence and accelerating economic growth, developments Mr. Trump certainly took credit for on Thursday [December 14, 2017].
A survey of chief executives released this month by the Business Roundtable found that, for the first time in six years, executives did not cite regulation as the top cost pressure facing their companies.
“C.E.O.s appear to be responding to the administration’s energetic focus on regulation,” Joshua Bolten, the roundtable’s president, said this month.

ERIC LIPTON and DANIELLE IVORY. “Most Far-Reaching’ Rollback of Rule.” The New York Times (Sat., DEC. 15, 2017): A22.
(Note: ellipses, and bracketed date, added.)
(Note: the online version of the story has the date DEC. 14, 2017, and has the title “Trump Says His Regulatory Rollback Already Is the ‘Most Far-Reaching’.” The online page for this article says that it appeared on p. A16 of the New York edition. My page number above is from my paper, which was probably the midwest edition.)