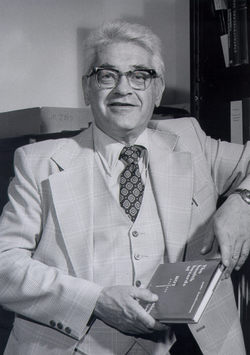 Petr Beckmann holding a copy of his The Health Hazards of NOT Going Nuclear. Golem Press, 1976. Beckmann died on August 3, 1993. Source of photo and Beckmann date of death: http://www.commentary.net/view/atearchive/s76a1928.htm

Not all those who are right, live to see their ideas vindicated. Thank you Petr Beckmann, for writing the truth, when the truth was not popular.

. . . when Finland, a country with a long memory of the Chernobyl disaster in 1986 and considerable environmental bona fides, chose to move ahead this year with the construction of the world’s largest nuclear reactor, the nuclear industry portrayed it as a victory, one that would force the rest of Western Europe to take note.

But the decision to build the reactor, Olkiluoto 3, Europe’s first in 15 years, was not taken quickly or lightly.
. . .
“There is an expectation that others will follow, both because of the way the decision was made and the boosting of confidence in being able to get through all the oppositional fear-mongering,” said Ian Hore-Lacy, the director of public communications for the World Nuclear Association, an industry lobbying group.
The United States, which has not had a nuclear plant on order since 1978, is experiencing a groundswell of interest. Taking the first step in a long process, Constellation Energy, a Baltimore-based holding company, announced in late October that it would apply to the Nuclear Regulatory Commission for permission to construct and operate a pressurized water reactor like the kind being built in Finland, possibly in upstate New York or Maryland. The Finnish reactor, designed by Areva, the French state-controlled nuclear power group, is being built by Framatome ANP, a joint venture of Areva and Siemens, a Germany company.
In addition, President Bush signed into law an energy bill in August that offers billions of dollars in research and development funds and construction subsidies to companies willing to build new nuclear plants. Several utility companies have applied for early site permits, a preliminary step toward building reactors.
Worldwide, the resurgent interest in nuclear power is even more pronounced. Twenty-three reactors are under construction this year in 10 countries, most of them in Asia, which has aggressively pursued nuclear energy. India is building eight reactors. China and Taiwan are building a total of four reactors and are planning eight more. Russia is building four and South Korea is planning eight.
…
Nuclear energy’s selling points were timely: it does not create emissions, unlike coal, oil and gas, and provides predictable electricity prices, a major bonus for Finnish industries, nuclear proponents said.
“The only viable alternative, if we want to maintain the structure of the economy, maintain our industries and meet our Kyoto targets, is nuclear,” said Juha Rantanen, the chief executive officer of Outokumpu, one of the world’s largest steel producers and one of Finland’s biggest energy users. “We can’t have a declining economy. We face huge challenges and an aging population. Something had to be done.”
Environmentalists, however, argued that nuclear reactors could never be entirely safe. They are always radioactive, and their waste remains toxic for 100,000 years.
But the designers of Areva’s pressurized water reactor, which is costing $3.5 billion to build, helped counter those arguments. In the event of a core meltdown, they said, the nuclear material would flow into a separate enclosure for cooling. They also said that the reactor is being built with enough concrete to withstand the impact of an airliner.
In the end, Finland’s largest trade union supported the project, basically sealing the deal.
. . .