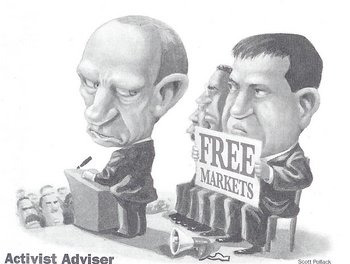 Since the following interesting article, Andrei Illarionov has resigned. That’s probably a bad sign for Russia, unless you argue that Illarionov can be more effective outside the government than inside it.
The article begins by quoting Al Breach, who is chief strategist at Brunswick UBS:

(p. A13) It’s a one-party state, and if you’re out, you’re out,” Mr. Breach says. “If he can help stop some of the bad things, it’s worthwhile sticking around.”
This year, however, things haven’t gone his way, with state-owned oil and gas companies swallowing up independent oil producers, vastly expanding the state’s presence in the economy. The result, says Mr. Illarionov, has been a fall in private investment in the oil industry and slowing oil-production growth–at a time when world crude prices are soaring. Meanwhile, state outfits have also bought stakes in private engineering companies and taken over the management of Russia’s biggest car maker, AvtoVAZ.
It is all anathema to Mr. Illarionov, a St. Petersberg-trained economist and longtime admirer of Ayn Rand, the American writer who lauded unfettered capitalism. In the early 1990s he was an adviser to Yegor Gaidar, then- prime minister and architect of Russia’s early market reforms. But he quit in 1994, criticizing the government for failing to curb inflation and for putting the brakes on overhaul (sic). He then became one of Russia’s most respected independent analysts: He was the only prominent economist to call for a sharp devaluation of the ruble before the currency crashed in August 1998.
Mr. Putin hired him as an adviser in 2000, and he was a top (sic) force in drafting the liberal, modernizing agenda that the president pushed through in his first term. His ideology — trimming state spending, slashing taxes, cutting red tape and deregulating Russia’s gas, electricity and railway monopolies — became official policy.
Mr. Illarionov was seen as one of the key drivers of crucial overhaul initiatives: a flat income-tax rate of 13%, a rainy-day Stabilization Fund for Russia’s oil windfall, and the decision to dip into the fund to make early repayments on Russia’s foreign debt.
But his reputation suffered in later years from a long, bruising fight over how to restructure the electricity industry, and a quixotic campaign against the Kyoto Protocol, both of which he largely lost. Russia ended up ratifying the climate-change pact last year.

For the full article, see:
GUY CHAZAN. “Putin Insider’s Outsider Game; Adviser Illarionov Preaches Capitalism, but Who Is Listening?” THE WALL STREET JOURNAL (Fri., December 23, 2005): A13.
(Note: There are several differences (e.g., in the title, and in the reference to Ayn Rand) between the online version of this article, and the print version of this article.)