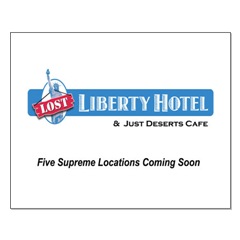 WEARE, N.H. – When we reached Justice David Souter’s home, a ramshackle old farmhouse along a dirt road, Keith Lacasse explained his plans for it if he’s voted onto the town’s Board of Selectmen in the election today.
The first plan, which Lacasse and his friends drew up right after hearing of Souter’s vote in the Kelo eminent-domain case last year, was for the town to seize Souter’s property and turn it into a park with a monument to the Constitution. But then Lacasse, a local architect, switched to an idea proposed by an activist from California: turning it into the Lost Liberty Hotel.
”Actually, it would be more like a bed and breakfast,” Lacasse said. ”We’d use the front of the house for a cafe and a little museum. There’d be nine suites, with a black robe in each of the closets.”
. . .
Most Americans have the traditional idea that property can be taken for ”public use” if it is actually going to be used by the public as, for example, a road or a park. But that definition gradually expanded over the last half-century as the Supreme Court ruled that property could be seized and turned over to private parties if there were special circumstances and an overriding public benefit, like eliminating ”blight” in a poor Washington neighborhood or breaking up a land oligopoly in Hawaii.
The Kelo case, however, went way beyond those decisions, allowing the town of New London to seize property that wasn’t blighted simply because it thought it could find a developer to make a more profitable use of the property. It was a new version of the field of dreams theory: if you tear it down, they will come.
”The Kelo decision wasn’t compelled by legal precedents,” says Richard Epstein, a law professor at the University of Chicago. ”It wasn’t a case of eliminating blight or breaking up an oligopoly. There was no precedent for kicking people out of their private homes just to warehouse the land for future development.”
The Kelo case was an opportunity for the justices to put limits on the use of eminent domain — and to look at how the power had been abused since cities had begun using expanded powers of eminent domain half a century ago. As Clarence Thomas pointed out in his dissenting opinion in Kelo, ”In cities across the country, urban renewal came to be known as ‘Negro removal.’ ”

Supreme Court Justice David Souter, Writing for the Majority in a Warrantless Search Case Decided by The Court This Week, Possibly Forgetting his Previous Vote in Kelo, to Allow Government to Seize Private Property Under Eminent Domain to Give to Developers:
“We have, after all, lived our whole national history with an understanding of the ancient adage that a man’s home is his castle.”