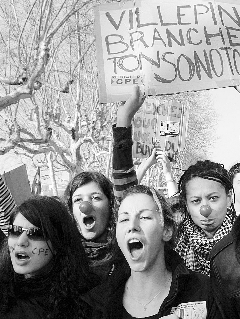 French students in Lyon protest Villepin with a sign that says “Villepin branche ton sonotone” which I think translates into “Villepin, plug in your hearing aide.’ Source of image: http://www.larazon.es/noticias/noti_int18071.htm
There is much to dislike about French Prime Minister Dominique de Villepin; for example his performance on Iraq, and his restrictions on foreign companies buying French companies. But, so far, he has acted heroically in trying to add flexibility to French labor laws. French students have marched and rioted, French unions will not speak to him, and French politicians have ridiculed him. Now he is under attack, even within his own party.

“. . . one day we are alone on the front line,” he said in defending his youth jobs plan last month. “In this solitude we must find the force to advance.”
But Mr. de Villepin’s problem of late is that his enemies have been multiplying, even in his own camp.
On Wednesday, Interior Minister Nicolas Sarkozy, who, like Mr. de Villepin, wants to run for president next year, for the first time distanced himself from his boss over the new labor law, which would allow employers to fire workers under the age of 26 without cause during their first two years on the job. 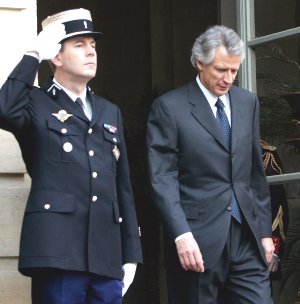 A salute to Villepin may be in order. Source of image: http://www.lesoir.be/rubriques/monde/page_5715_419028.shtml