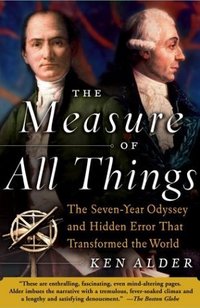 (p. 137) Prieur believed that uniform measures would make France a great nation, smoothly administered from the center and united through trade. The metric system would transform France into “a vast market, each part exchanging its surplus.” It would make exchanges “direct, healthy, and rapid,” diminishing the “frictions” which impeded the wheels of commerce. These frictions included anything that masked the true price of an item, such as the variable measures of the Ancien Regime. The price of an item, Prieur argued, necessarily depended on many factors: its scarcity, the work necessary to produce it, the quality of the product. But in the final analysis, price was whatever people agreed it should be. This meant that when people agreed on a price they needed to know what they were getting, not be baffled by secret shifts in the quantity being exchanged. Those who claimed that differences in measures aided commerce were just talking about their personal profits. “The French Republic,” he wrote, “can no longer tolerate men who earn their living by mystery.” Worse, those who profited from the diversity of measures, said Prieur, corrupted those who tried to conduct honest and transparent exchanges by “complicating commerce, spoiling good faith, and sowing error and fraud among the nations.” Until commerce was carried out with complete probity, the common people would doubt the advantages of free trade. Only if price were the sole variable in exchange would these exchanges be based on clear understanding between parties.

Alder, Ken. The Measure of All Things: The Seven-Year Odyssey and Hidden Error That Transformed the World. Paperback Reprint ed: Free Press, 2003.