Ireland is a capitalist enclave, in a Europe infused with high taxes, heavy government regulation, and the welfare state.  Captitalism is sometimes portrayed as inhumane, but it is under capitalism that diversity and tolerance thrive:

Like traditional Dublin pubs, bars catering to immigrants operate according to an Irish barman’s basic principles: drinks served promptly, customers treated with respect and, when the occasion calls for it, readiness to listen to the troubles of the day.

Since members of many other ethnic groups — from Asia, Africa and Eastern Europe — have also opened businesses in the area, Mr. Lee’s short, gritty stretch of Parnell Street feels like a bewildering experiment in diversity. This part of Ireland’s capital is a microcosmic study of how global migration trends can transform a formerly homogeneous city.

One of Mr. Lee’s neighbors displays an array of dangling hair extensions for African women; another sells sausages and bags of pretzels imported from Poland, in three or four different flavors.

The Ice Bar itself has been decorated by an eclectic imagination: Chinese drinking poems are painted on one wall and deer skulls are mounted on another. The patrons are a jumble of students and artsy types, Asian and European, and music fans drawn by Mr. Lee’s policy of letting local D.J.’s and Spanish bands take over the sound system.

Mr. Lee likes the "good balance" and says his customers, in an unspoken gesture of good will, drink each other’s national beers. "We are curious about another culture," he said. "I’m Korean; I want to have a pint of Guinness instead of Korean beer." And Irish patrons tend to order bottles of Asian brews like Tsingtao from China and Chang from Thailand.

"Life is quite short, and I wanted to have a look all over the world," he said. "That was my plan. But I realized I quite like this place." 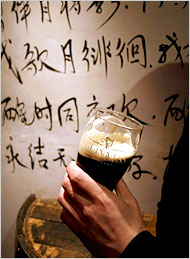 "his customers, in an unspoken gesture of good will, drink each other’s national beers."  Source of caption, and photo: online version of NYT article cited above.