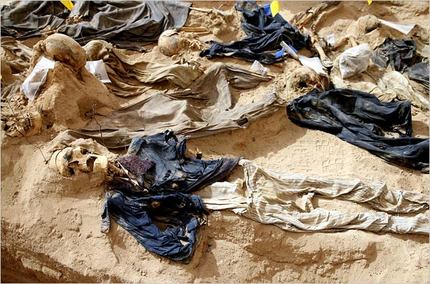 If Ramsey Clark is looking for something to get outraged about, maybe he should visit the Blue Man’s grave?  Source of photo:  the online version of the NYT article cited below.

(p. A1) ON THE EDGE OF THE ASH SHAM DESERT, Iraq, June 3 — Among experts on the American-led team investigating Iraq’s mass graves, the skeletal remains lying face-up at the rear of the tangled grave here have been given a name — the Blue Man — that speaks for a sorrowful familiarity developed by some of those who work with victims of mass murder.

But more than his blue shirt, and his blue-striped trousers, what distinguishes the remains is the way they speak for the terror of death under Saddam Hussein.  The man was thrown backward by automatic weapons fire, his eyes blindfolded and his arms tied behind his back, his skull jerked upward at the neck, his fleshless mouth gaping, his two rows of teeth stretched apart, as though in a primal scream.

Together, in the late winter of 1991, at least 28 men were executed here, crowded together in a pit their killers scraped with a backhoe from the desert floor.  Rounded up along the alleyways of their native city, they were forced aboard a bus or truck and driven out along an isolated highway.

After barely half an hour’s journey, the grim caravan turned down a bumpy track, halting just far enough into the desert for gunfire to be muffled from passing traffic.

The end would have come quickly, the forensic experts said, victims stumbling out of the vehicle, herded into the pit, then pushed forward into a shallow cut not much wider or longer than a stretch limousine.  At the last moment, judging by the pile of bodies, the victims surged backward, perhaps in terror at the sound of rifles being readied for fire.

Among the bodies, the experts have located at least 80 spent cartridges from Kalashnikov rifles, which were the weapon of choice among the killers of Mr. Hussein’s secret police.

Michael Trimble, who is called Sonny, the leader of the mass-graves team that set up camp beside an escarpment in Iraq’s western desert last month, is a 53-year-old forensic archaeologist from St. Louis.  He is a veteran of other sites of mass killings around the world, on assignment from a civilian post with the Army Corps of Engineers.

Standing above the pit where the desert victims died, he said the 120-member team here, now in their third week of excavation and examination of two mass-grave sites, were sustained through days of punishing 130-degree heat by an urge to bring justice for the victims.

"When you work with these people for some time," he said, referring to the remains, "you get real attached to them, you feel real bad about what happened to them, and you want to do whatever you can to bring their killers to account."