Mike Matthews holding one of the vacuum tubes produced in the Russian factory he owns.  Source of photo:  online version of the NYT article cited below.

Sharp-elbowed personalities in Russia’s business world are threatening this factory in a case that features accusations of bribery and dark hints of involvement by the agency that used to be the K.G.B.

Though similar to hundreds of such disputes across Russia, this one is resonating around the world, particularly in circles of musicians and fans of high-end audio equipment.

Russia is one of only three countries still making vacuum tubes for use in reproducing music, an aging technology that nonetheless "warms up" the sound of electronic music in audio equipment.

"It’s rock ‘n’ roll versus the mob," Mr. Matthews, 64, said in a telephone interview from New York, where he manages his business distributing the Russian vacuum tubes.  "I will not give in to racketeers."

Yet the hostile takeover under way here is not strictly mob-related.  It is a dispute peculiar to a country where property rights — whether for large oil companies, car dealerships or this midsize factory — seem always open to renegotiation.  It provides a view of the wobbly understanding of ownership that still prevails.

(p. C4)  If the tube factory dies, so will the future of a rock ‘n’ roll sound dating back half a century, the rich grumble of a guitar tube amplifier — think of Jimi Hendrix’s version of "The Star-Spangled Banner" — that musicians say cannot be replicated with modern technology.

"It’s nice and sweet and just pleasing sounding," Peter Stroud, the guitarist for Sheryl Crow, said in a telephone interview from Atlanta.  "It’s a smooth, crunchy distortion that just sounds good.  It just feels good to play on a tube amp."

He added:  "It would be a catastrophe for the music industry if something happened to that plant."

The transistor disrupted the vacuum tube, a case that would usually be described as an episode of creative destruction.  One secondary lesson from the story above is that there may be a previously unremarked symmetry to the process of disruption.  A disruptive technology typically appeals only to a niche in the market, while the incumbent technology dominates the mainstream.  But after the disruptive technology improves sufficiently to capture much of the mainstream market, maybe there often will remain a niche market that still prefers the older disruptive technology?

To use Danny DeVito’s example in "Other People’s Money," the car may have disrupted horse-and-buggies.  But for some nostalgic "jobs" the horse-and-buggy may still be the better product, so there will likely remain some demand for buggy whips.

To the extent that this phenomenon is significant, it might serve to ease the labor market transition when one technology leapfrogs another. 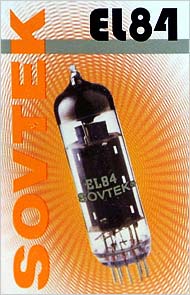 A vacuum tube used in guitar amplifiers, that was produced in the factory that Mike Matthews owned.  Source of photo:  online version of the NYT article cited above.